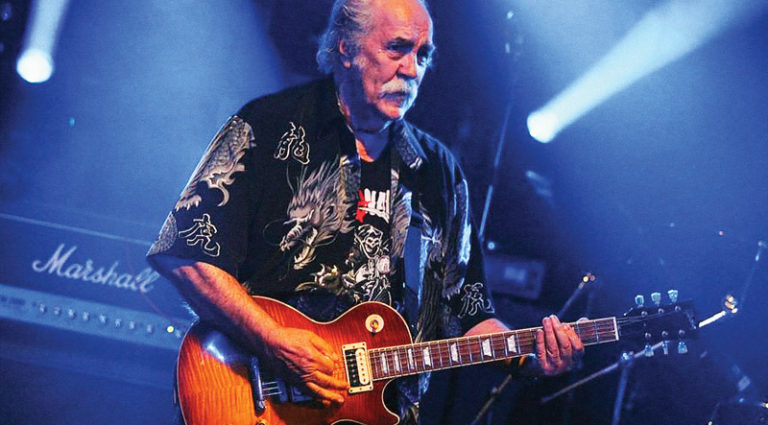 “I always say it’s the song, the performance, and then the production.”

Nazareth guitarist/producer Manny Charlton believes those three things, in that order, make a song memorable. When you combine a group of songs containing all three elements, you get a great album, like Nazareth’s 1975 hard-rock heavy-hitter Hair of the Dog. It includes the bulldozing title song (with its blistering chorus) and the ballad “Love Hurts,” a gold-selling Top 10 single. The album, which also features notable tracks “Miss Misery” and “Please Don’t Judas Me,” has sold more than 1 million copies in the U.S. and is so revered it has its own tribute album, Heirs of the Dog: A Tribute to Nazareth, by an aggregate of musicians led by guitarists/co-producers Joey “Joecephus” Killingsworth and Dik LeDoux (see our review in this issue).

Special guests on the reinterpretations include Charlton and members of Nashville Pussy, Kentucky Headhunters, Supersuckers, and Clutch, among others. Some proceeds go to the Society for Facioscapulohumeral Muscular Dystrophy (FSHD) research.

“Joey asked if I would get involved or contribute in any way. I said, ‘Sure!’ and that was that,” said the 80-year-old Charlton, who lives in his native Spain. “I just asked him what was available. He said, ‘Changin’ Times,’ and I said, ‘Oh sure, I’ll play on that for you.’ The song is like part of my DNA. I played it for so long with Nazareth and my various solo projects. It’s a fan favorite.”

“We just felt that three albums with Roger was enough,” Charlton said. “He wasn’t really for what we wanted to do as a band, because we were trying to be more of an American band. Our favorites were the likes of the James Gang, Little Feat, and the Band – that was the way we were trying to move. We just wanted to get our music to appeal more in America. The albums Roger did were all really great – he did a fantastic job and we made a lot of headway in Europe with them.”

Charlton had produced the band’s early demos and offered to take on the task.

“I said to the band, ‘I’ll produce the band.’ They said, ‘Okay, produce one song and we’ll see how it goes.’ I produced ‘Love Hurts.’ After that, it went in the American Top 10 as a single. Then they trusted me with the whole album. We couldn’t seem to crack the American market until we did Hair of the Dog.”

“Love Hurts” was written by the legendary Boudleaux Bryant, and the Everly Brothers first had a hit with it. The U.S. release of Hair of the Dog included “Love Hurts.” In the rest of the world, the album instead had the Randy Newman ballad “Guilty.” Jerry Moss, co-founder of A&M Records – Nazareth’s U.S. label – insisted “Love Hurts” be included.

“When we were mixing, Jerry came to London to hear it, and we played the album for him. He said, ‘It’s great. Take “Guilty” off and put on “Love Hurts.”’ It was down to him,” said Charlton. “He made that decision, and he was right. He hit the nail on the head.”

Charlton planned the distinct rhythm and lead guitar parts throughout Hair of the Dog, often with the thought of how the songs would be performed live.

“I was more concerned with the structure of the song holding up from a rhythm guitar point of view or a riff point of view. I wanted the song to have a groove. I wouldn’t worry too much about the solo until the actual solo part in the song,” explained Charlton. “You’ll notice I didn’t really play a lot of guitar fills. I played a pretty tight, heavy, rhythm part. And I continued that, and played the solo over the top. That was the method.”

For the sessions, Charlton played a ’60 Les Paul Custom and an early-’60s Stratocaster.

“That Les Paul was my main axe for many, many years. I sold it to pay off a frickin’ lawyer! I wasn’t happy about that. The Strat was great. I wish I’d never parted with it. I swapped it for a pedal steel, and I could not make any sense of it! Now, it doesn’t matter which guitar I play; I’ve found through the years that when I pick up a guitar and play, it sounds like me.”