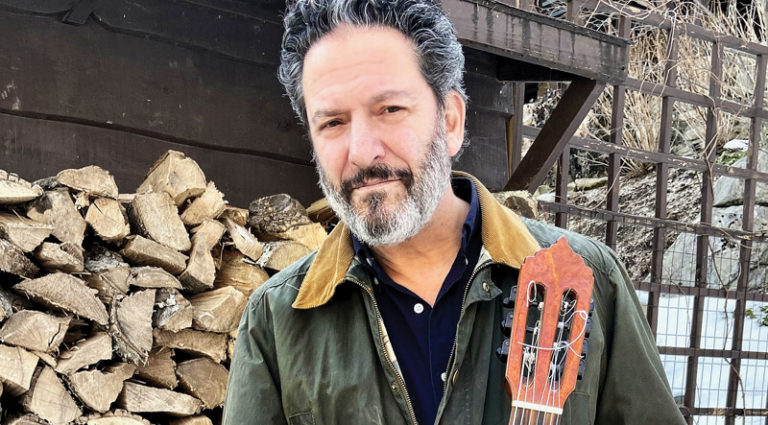 In just over a one-week period in April of 2020, John Pizzarelli turned 60, lost his father (famed jazz guitarist Bucky Pizzarelli) to coronavirus, then his mother, Ruth, passed. Not knowing where to turn, John grabbed his seven-string guitar and began playing – first standards, then working up solo versions of Pat Metheny Group arrangements. He and Metheny later connected, and in short order, a brilliant solo-guitar album called Better Days Ahead was born.

You lost both parents in a very short time. How did you find something positive and musical in that time of grieving?
Well, my father would always retreat to the guitar when times were tough, like when his mother was dying or there was some kind of emotional turbulence. I was sort of channeling that work ethic. He taught himself classical guitar and was always looking for new music for us to play. In that light, I saw Pat Metheny’s music as that kind of personal creative challenge.

We normally associate you with the Great American Songbook of jazz standards – not the contemporary jazz world of Metheny.
I’ve been a fan of Pat’s since the Metheny Group’s first album, with “Phase Dance” on it. My father and I saw him at the Beacon Theatre in ’88 and ran into him on the road a number of times. He wrote me to check up on my father when he was sick and also sent a condolence message when Bucky passed. We struck up a conversation via e-mail and I told him I was learning some of his tunes. I also sent a rough video of me playing “James,” which led to Pat sending me lead sheets of his tunes. I could then hold this music in my hands and dive into every note; it’s like the holy grail to get that directly from a composer!

How does Metheny’s modern approach fit into your lexicon of traditional jazz guitar.
Pat is a musician who writes and performs on guitar, so I don’t think of his approach as any more modern than, say, George Van Eps. Pat composes timeless songs that lay perfectly on the guitar. I think the idea that he’s some inaccessible modern artist is incorrect; he uses the tools available to him, but still has a sense of where he’s come from musically – and where he’s going. And Pat brings the listener along with him.

You haven’t played this much fingerstyle before. What are the challenges of that approach?
In a word, nails. Keeping your nails from splitting, chipping, and breaking – that’s a constant challenge! I used a Moll seven-string classical for most of the album, strung with roundwound Aquila strings. String-squeaks can be an issue, but they’re part of my sound most of the time.

On “April Joy,” we can clearly hear the low string on your seven-string.
I used the seven-string on the entire album, recording into GarageBand. I’d finish the takes and send them to guitarist Rick Haydon, in Illinois; he would polish and critique, then send them back. It was a pretty simple operation.

“Letter from Home” and “If I Could” bring to mind a piano approach, specifically of Bill Evans, who’s also a big Metheny influence.
My chord/harmonic style is mainly influenced by the people I’ve worked with and listened to. George Van Eps, Bucky, and arranger Don Sebesky come to mind. Don is a big Bill Evans fan, so the influence would come from there.

Born in 1960, you fit squarely into the Led Zeppelin/Aerosmith generation. Were you ever drawn to playing rock?
I was a big Beatles fan, and still am. I also loved Peter Frampton, James Taylor, Jackson Browne, and Billy Joel. My father used to joke that I was the only guy who played jazz to support his rock habit!

Not many people get to follow in their father’s footsteps, enter that chosen profession, and then work closely with him for years. That must be incredibly affirming, even in these bittersweet times.
My father was a great inspiration. I think Bucky loved watching me play guitar with the bands I was in. When he saw I could learn stuff off of records, he steered me in the direction of his duets with George Barnes, and said learn this stuff. So I did and then he said, “Play the seven-string and we can work together.” We had so much fun doing that. As my dad used to say, “You can’t beat blood.”

Return of the Trashmen