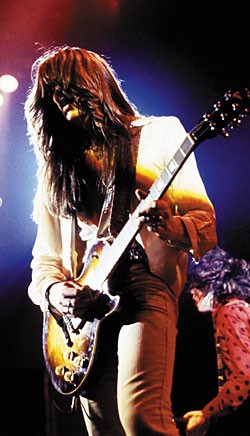 Gorham recently searched Lizzy’s vault and emerged with a rare gem – an unreleased live recording from 1977. Legendary producer Glyn Johns was enlisted to remix and remaster the tracks, creating Still Dangerous. Gorham explains the significance of this show and why it epitomizes such an important period in Lizzy’s career, as the band was primed to conquer the world. While the acclaimed 1978 compilation, Live and Dangerous, is considered one of the greatest rock albums ever, Gorham believes Still Dangerous is a better portrayal of Lizzy in action.

How many shows did you listen to before choosing this one?
I think I’d only listened to one other. The box said “Philadelphia 2” and I wondered what that meant. There were a lot of things labeled with working titles that bore no resemblance to the end product. There’s one I did remember because the working title for “The Boys Are Back In Town” was “G.I. Joe.” So I knew what that one was, but I didn’t know what “Philadelphia 2” was. I called the ex-manager, he remembered it and explained. What you’re listening to is a radio show we did in Philadelphia called “The King Biscuit Flower Hour.” We played two nights and this is the second. The first night was broadcast and included the “King Biscuit” audience, where people show up no matter who’s playing. We asked to play and record a second night, but specifically wanted to advertise it as a Thin Lizzy show because we wanted our fans there. This is that second show.

We had just finished Bad Reputation and we’d been offered a three-month arena tour in the United States. We had a huge fan base, and a few hit singles and albums in Europe. But over here, we had one song, “The Boys Are Back In Town,” and one album, Jailbreak. That’s all America knew about Thin Lizzy. So this was going to be the tour to break us in America. We knew how we were playing – we were on top of our game and woe betide any band that has to follow us because we’re going to kick your ass! That’s the attitude we always walked out with. In listening to these tapes, we had the attitude, but we also had the chops.

We thought that before going out on an arena tour, we needed a two-week warmup period. So that’s what this album is from. What you’re actually listening to is Thin Lizzy road-testing these new songs to gauge audience reaction and see how well we play them. Do we have them in the right order in the set or are we killing the flow? That opening song is a brand new song, mid tempo, straight out of the bag. I don’t know what was going through our heads because we never did stuff like that. This was a big experiment to see what kind of reaction we’d get. It was really cool to sit in the studio listening to this and remember what was going through our heads at this point in time. Whether that set list would have stayed the same when we got into the arenas is under pretty heavy debate.

Is what we hear a bona fide live show?
Yes. That’s what caught my attention. We’ve started out with “Soldier Of Fortune”! What I loved is that it was so different.

Was anything from the show left out?
There was stuff left out because two reels were destroyed. We’re not quite sure how it happened. When we put them on, it sounded like somebody had put their fingers on the spool or something was leaning against it as it was recording because it was slow and warbled. I panicked! But there was no fixing it. So this is the show and I’m sorry we lost the two other reels.

What condition were the tapes in when you found them?
We had to bake all these tapes we found. Whether they specifically needed it or not, we did it anyway as a precaution. There were a few that we were wondering if we should even try to pick up. After we baked everything, we got it all into a digital format to save this stuff because it’s Thin Lizzy history and we knew it was disintegrating. We used Pro Tools to transfer the tapes to digital. Glyn Johns was adamant that we use an analog board, but we didn’t actually work within Pro Tools.

Does any song stand out because of the performance or the way it was received by the audience?
The song I really liked is “Massacre,” for one reason – Brian Downey’s drumming. Sometimes you tend to forget about each individual because you work with them so much. But when you take a break and you’re able to sit back and listen objectively, you realize, “Wow! This guy was kick-ass!”

What was your setup during this period?
I was using a ’73 or ’74 cherry sunburst Les Paul Deluxe with mini humbuckers. I went to the first jam with this no-name Japanese Les Paul copy that was falling apart. When I got in the band, Phil said, “We’re going to have to buy you another guitar!” But there was a specific budget because the band was broke and in heavy debt. So buying that guitar was a pretty big coup. I was picking up Standards and Customs first, but they were too expensive. The price of the Deluxe was lower, so I tried a couple and picked out the one I really liked. We were using 100-watt Marshall amps and I had an MXR Phase 90. Brian Robertson had a wah and Copicat delay the tape kept falling out of! He already had his black Les Paul Custom, which he still plays today.

Have you discovered other audio or video tapes to consider for future release?
After we get done with the Lizzy tour, I’m going to grab an engineer, go back into the studio, and see what we’ve got. I’d love to find some old film somebody had the foresight to save. I’m hoping to find outtakes from the studio albums, or songs that were finished and not included on albums. Let’s find out why. It’s going to be fun just to see what’s there. –


This article originally appeared in VG‘s July 2009 issue. All copyrights are by the author and Vintage Guitar magazine. Unauthorized replication or use is strictly prohibited.
Thin Lizzy Scott Gorham Dancing in The Moonlight 07