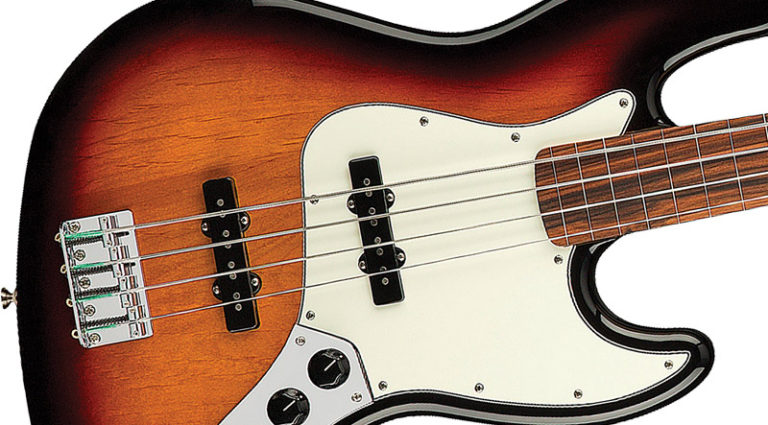 The fretless has long been mysterious territory for bassists dazzled by the sonic achievements of Jaco Pastorius, Pino Palladino, and Tony Franklin but reluctant to compromise their intonation. The Fender Player Fretless Jazz Bass seeks to give bassists that timeless vibe without a major investment, plus a few bonuses.

Made in Mexico, the Player Jazz Bass Fretless puts a lot of bass on the table for $749: 3-Color Sunburst or Polar White (with a parchment pickguard), a fast C-profile maple neck, 9.5″-radius pau ferro fingerboard, two Player Series Alnico 5 single-coil pickups, and two Volume controls with a master tone. The offset body is alder and the neck has a 34″ scale. As the nut is only 1.5″ wide, the Player Fretless Jazz has a slim, narrow neck that is remarkably easy on the hand.

The major feature is the addition of inlaid fret markers, allowing bassists to stay within bounds of intonation. If you’ve never played fretless before, there are two tricks to success. Like slide guitar, you must grab the note directly over the fret (that is, where the fret would be), unlike conventional bass and guitar. This is essential for nailing a well-intonated attack. The second trick is to take advantage of its flatwound strings and develop a good wrist vibrato. That combination produces the warm tone that draws certain players to the fretless bass – and that mm-wahhh sound is great on this one.

After testing this bass for weeks, it was hard to find any flaws. It’s a four-string with killer looks, tone, and real Fender heritage. The fretless markers make a difficult job much easier; after that, it’s up to you to stay focused and play correctly. You will be rewarded with gorgeous sounds.