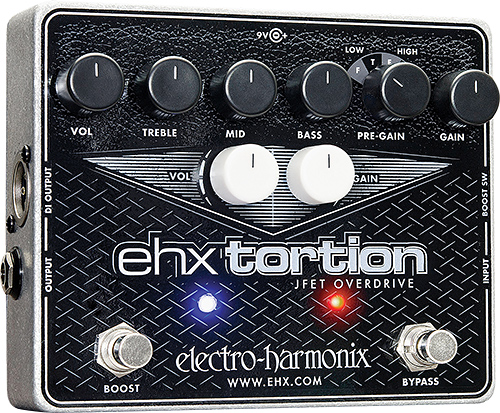 Having teenage metal-shredders at home makes one appreciate that a little overdrive can go a long, long way. Note to sons – not all songs benefit from being played “at 11.” In the real world, bandmates expect you to sit back in the mix from time to time (like, most of the time). But when it’s your turn to rip into a lead, kicking up the OD a few notches can be just the ticket.

One problem with many OD and distortion pedals is that they’re either “on” or they’re not – great big tone when you stomp… and then they just disappear. That’s not the case with Electro-Harmonix’s flagship distortion, the Tortion. EHX uses JFET analog technology to reproduce the overdriven and distorted character of a tube amplifier. It may be one of the most versatile, best-sounding OD and distortion pedals available.

The Tortion has a buffered Bypass stomp switch, but the whole idea is to keep this pedal on all the time. In its “normal” mode, there are EQ controls (bass, mid, and treble), a Gain knob that controls the amount of input gain, and a four-way Pre-Gain switch that controls the level and tone of the initial input signal. Think of “normal” mode as the tone you want when you’re playing in the mix. The Pre-Gain taps lower input level, for vintage plexi tones, and higher gain for a hotter metallic sound. Each Pre-Gain setting has two tone selections – “F” and “T” for “full” and “tight” – for shaping the bass distortion.

The Tortion’s Boost footswitch takes things to another level (even to “11,” my sons). The boost Volume and Gain knobs are completely independent of the “normal” settings, allowing the two modes to function like separate channels on a tube amplifier. This is very cool, especially when it’s time to step out front for that well-practiced signature riff. The boost settings get your signal hotter and more compressed, but it still sounds like it’s coming from the same amplifier and not some digitally clipped alien monstrosity. Could you get this by using two OD pedals in series? Probably, but you would likely be wrestling with a whole lotta extraneous noise, compounded by the double gain-staging. The EHX Tortion is shockingly quiet for an OD.

The EHX Tortion proved a great pedal in front of both a tube and a solid-state amp. It allowed the overdriven character of the tube amp to transparently come out at practice-level volumes. It even tricked an old Peavey Renown into thinking it was a black-faced Deluxe (almost).