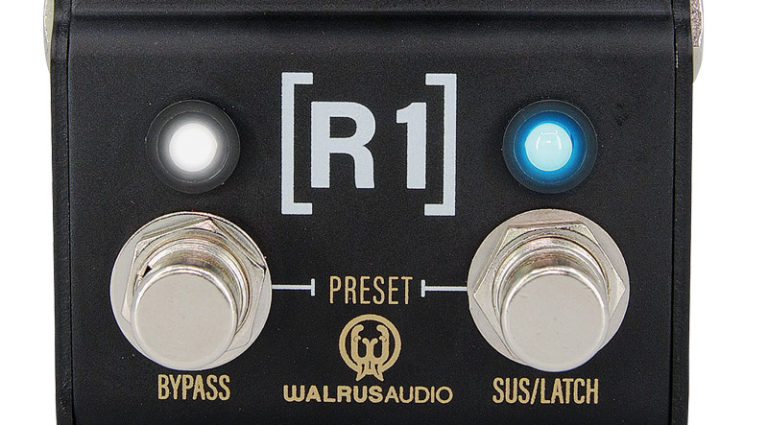 Many manufacturers claim “studio quality” reverb, but not all nail it. Walrus Audio’s R1 High Fidelity Reverb is the latest to tempt discriminating players with high-tech features and promises of classic sounds.

Controls and connections on the R1 are plentiful, including MIDI in/through jacks, 9-volt power jack (no battery), dual footswitches with multi-color LEDs, and controls for Decay, Swell, Mix, Program, and Tweak and Tune (both with a three-way toggle).

The R1 is a knob-tweaker’s dream. A load of parameters like Pre-Delay, modulation Rate/Depth, High/Lo reflection tone, stereo width, and footswitch bypass modes are presented logically for navigation. The reverbs are laid out in six program banks – Spring, Hall, Plate, BFR (Big F***king Reverb), Rfrct, and Air – the last three being exclusives to the R1.

Each program is true to its name/type, with added texture and personality. In addition to the six reverbs, the R1’s other unique features include a Swell control for a smooth and slow volume effect, along with a Sustain/Latch footswitch to hold reflections so you can play over the top of them.

With complex reverb reflections, a crisp, clear high-fidelity signal path, and nearly silent operation, the R1 offers tons of tweakability and personality-rich reverb presets. It can put your tone in the right ambient space, and fuel your creativity.