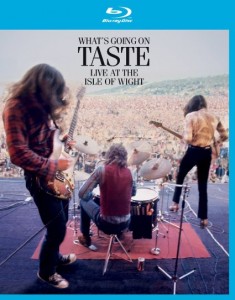 Taste was a criminally short-lived Irish blues-rock trio in the late ’60s, featuring bassist Richard McCracken, drummer John Wilson, and the extraordinary guitar and vocals of Rory Gallagher. They played 1970’s infamous Isle Of Wight Festival, in front of 600,000 people, immediately after deciding to break up.

Murray Lerner’s documentary centers around that set, and mercifully the band’s songs are shown in their entirety – as opposed to Lerner’s maddening Festival, about the 1963-’65 Newport Folk Festivals, in which nearly every performance is truncated.
The concert is fleshed out with informative background from Rory’s brother, Donal, and archival interviews with Gallagher himself. Accompanying them are interviews with The Edge, Bob Geldof, and Larry Coryell, singing the Irishman’s praises. Brian May declares, “It was Rory who gave me my sound,” after the future Queen guitarist asked about his setup (a Vox AC30 with a Dallas Rangemaster treble booster).