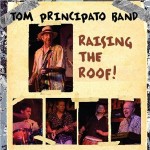 Principato has long been known as a fine guitar player, but here production and vocals take him to a new level. There’s plenty of the stuff you expect from Principato, including funky New Orleans-style rock like “Lock and Key,” with horns, organ and precise chording; Fender heaven on the solos. “Too Damn Funky” is exactly that, with a nasty solo and cool chordal work on the outro. “Mi Solea” is an emotional instrumental that gives Principato a chance to show his stuff. His soloing is as clever and on-the-money as you want. The same goes for his workout on Jimmy Smith’s “8 Counts For Rita.” Its old fashioned greasy, funky soul feel lets Principato show off nice changes and great lead licks. And the closer, “They Called For Stormy Monday (But ‘Mustang Sally’ is Just As Bad!)” will definitely find a sympathetic ear in every working musician. Recorded live and with a perfect rendition of the Bobby “Blue” Bland/Allman Brothers versions of “Stormy Monday,” its lyrics have been adapted to include every song, and in some cases every band any musician over the age of 30 is sick of playing.

The good news is, with releases like this one, Tom’s bringing new and varied music to that realm.

In the Middle of the Night