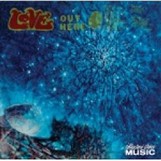 Some consider these albums minor releases in the Love canon. But neither might have been considered so if the magnificent Forever Changes hadn’t set the bar so high. While they may not meet that high level, each has plenty to recommend it.

False Start opens with a rare and brief guest shot from Jimi Hendrix on “The Everlasting First.” The song’s three minutes were culled from an impromptu eight-hour session with Hendrix’s old friend and Love co-founder Arthur Lee and a revamped Love. That cut alone, with Jimi’s leads and Arthur’s singing at their soaring soulful best, makes the disc worth having. But the bulk of False Start shows that Lee was a long way from running out of creative steam.

Out Here, the band’s first release for Blue Thumb (False Start was their second) came from sessions that also produced the group’s final Elektra LP, Four Sail. Elektra claimed what it judged the best cuts and Lee released the rest as Out Here. Although harder (a flinty remake of “Signed D.C.” from their eponymous debut), and sometimes jazzier (“Nice To Be”), than the crystalline baroque-ish folk rock psychedelia of Love’s first three albums and much darker than False Start, Out Here also shows an Arthur Lee who was far from the finish line and highlights how much bands like the Byrds, CSN&Y, and even harder, thrashier groups owe him.

In fact, Lee’s influence, acknowledged or not, on veteran bands (i.e. The Stones’ “She’s A Rainbow”) and newer artists (White Stripes, Matthew Sweet) is long-lived and widespread. While Forever Changes may be the best evidence of why that is, both Out Here and False Start are full of the Lee’s creative brilliance and musical foresight, and different versions of his groundbreaking band.