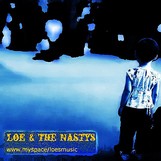 Loe and the Nastys deal in music that isn’t popular with young folks anymore; equal parts jazz, Jobim-influenced Latin music, and even a little Dan Hicks and His Hot Licks, this quartet has a smoky sound that evokes a feeling as cool as the other side of the bed.

“Loe” is Loe Nudell Lee, who sings and plays keys and some guitar. Her vocals perfectly fit the hipster cool of cuts like “Tap Slide” and the smoldering funk of “Hit That Drum,” and she ably handles rhythm guitar while lead guitarist Ben Abrahamson shows a strong jazz leaning on cuts like “Dum Dum” with Django-esque soloing in the intro and a fine acoustic solo in the body of the song (which is a somewhat odd mix of Jobim with Spanky and Our Gang!). It works wonderfully. Abrahamson’s electric solo on “My Oh My” gives a feel for his fine chops, as does the blues march “Lovin’ Way,” which shows how easily he can make a well-written song even more interesting. The lovely instrumental “Penny Waltz” features nice changes with beautiful acoustic guitar. “Unable To” has fine flamenco-style guitar behind an airy vocal.

Abrahamson shows off his electric jazz chops on a couple of other cuts, including the scary (both musically and lyrically) “Gun” that lets him get a little more inventive than he has throughout the rest of the record.

Loe & the Nastys are a quiet band that has made a quiet record. But that doesn’t mean it’s boring.