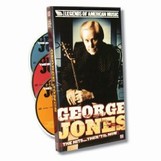 Unlike some country greats, George Jones is no au courant object of fashion, and he’s not part of today’s you-can-hardly-tell-it’s-country music. From his earliest hits, when he was basically imitating Hank Williams, until the day before yesterday (this chronological collection ends with 2001’s “Tramp On Your Street”), he has been an unyielding champion of drinkin’/weep-
in’/cheatin’ unapologetically country country music. As such, only Hank, Merle Haggard and ex-wife Tammy Wynette – the latter two represented here in duets – rival him for sheer beauty of voice and phrasing.

Greatness usually transcends genre; who hasn’t watched Tiger Woods play the world’s most unwatchable sport? And George Jones is just as remarkable at what he does. How could anyone, fueled by a few fingers of Early Times or not, fail to feel it when Jones sings of faithlessness told from either side (“The Window Up Above,” “He Stopped Loving Her Today”), of hanging by a bourbon-soaked thread (“These Days I Barely Get By”), of raising Cain just for the heck of it (“White Lightning”), or of the aftermath of jumping feet-first-and-hopeful into another ill-fated romance (“Once You’ve Had The Best”)? No true red, white, and blue-blooded earthling could. And here are 60 prime examples of why.