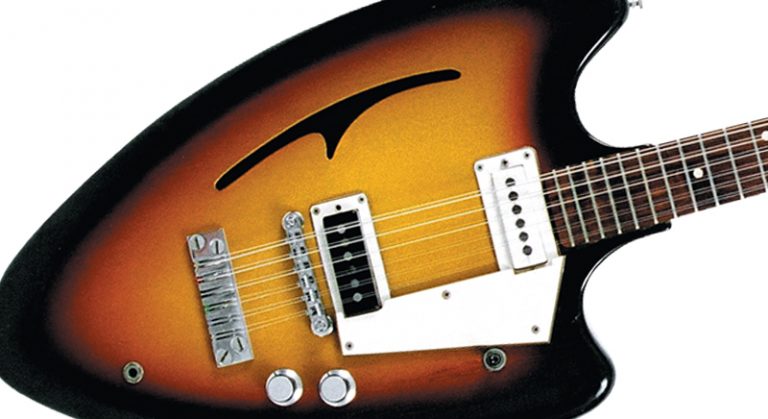 Here’s a story that has “Hollywood blockbuster” written all over it. It’s got so many cinematic staples, you can almost hear “Oscar” murmured in hushed tones.

There’s the Holy Grail factor. There’s the underdog, “Rocky” element. And we’ve all heard those true stories of a family reluctantly moving across the country, even though their dog just ran away; then Rover shows up on their doorstep 10 years later, having miraculously trekked 1,000 miles over obstacles great and small.

The story of Murphy Music Industries has all those things and more. Except in this case, instead of Rocky Balboa going the distance, the referee stops the fight after three rounds.

When I first laid eyes on the guitar pictured here, in 1985, I had the same agape stare you have right now. Sam “Fat Dog” Cohen, of Subway Guitars, in Berkeley, called exclaiming about “the coolest guitar I’ve ever had,” and was nice enough to give me first crack at it.

According to my “Off The Wall” column in the March ’86 issue of Guitar Player, I traded Fatty a St. George bass and Supro amp, which sounds about right. Back then, that meant this was a tad pricier than most of the oddballs I was inhaling like a Dirt Devil – about 300 bucks, maybe a little more. One pickup was missing, so Sam gave me an EKO pickup that fit the slot (hence, the black rear pickup), and I replaced the original bridge with a Gotoh tune-o-matic copy.

By then I’d been chronicling el-cheapo guitars for almost three years, and the Holy Grail was considered to be the Hallmark Swept-Wing, because, despite full-page ads in the first issues of GP, no collectors had actually seen one, and some speculated that it didn’t even exist – that the company shot its wad on said advertising and never went into production. This later proved false, and for a time I was the proud owner of a red-to-black sunburst hollowbody Swept-Wing (which is now being made again by the revived Hallmark company).

But for something to be the Holy Grail, people have to first know that it exists – or is at least rumored to exist. Which makes the Murph 12-string the Holier Grail. 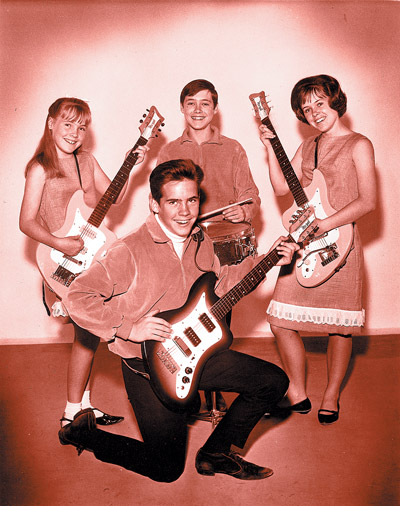 When I wrote that first column, I admittedly knew nothing about the Murph company and neither did any dealers or collectors I talked to. I noted its similarity to Hallmark and other Southern California companies, but in spite of a headstock logo that said “Made in U.S.A.,” I assumed it was made in Italy, since many of the more far-out guitars of the mid/late ’60s bore American brand-names but were built, at least in part, by accordion-turned-guitar factories in Italy, like EKO. Seeking any tidbit of information, I closed the column with the plea: “Murph, phone home.”

To my surprise, shortly after the article hit newsstands I got a call from Patty Bryant (nee Murphy), widow of guitar wizard Jimmy Bryant and daughter of one Pat Murphy. Mr. Murphy built numerous models under the Murph name, including what he referred to as the “heart-shaped” 12-string – a warmer description than the one I’d published: an electric pizza spatula. Some of the information I got from interviewing Pat (the basis of another “Off The Wall” column three months later) has subsequently proved inaccurate – according to recent conversations with Tim Murphy, the youngest of the five Murphy kids, and the research of Australian Dan McGonigal, who put together a Murph website. (For pictures of other models and more company history than I have space for here, go to murphguitars.com.)

The brief version of the company’s brief history started with the Murphy children, who were already show business vets by 1965, singing and dancing and appearing in commercials and TV shows – including a later “Dragnet” appearance by Tim and older brother Terry. For the kids’ combo, the Murphys, their father didn’t just decide to build them matching guitars; in February 1965, he leased a 1,200-square-foot building on First Street in San Fernando, California, and launched Murphy Music Industries.

The poplar bodies, pickups, and electronics were all made in-house. Tuners were Kluson Deluxe, and only the bridges, whammy bars, and rosewood for fingerboards were imported from Gotz of Germany. The most common Murph was the Squier, which resembled Fender’s Jazzmaster; in fact, Fender issued a cease-and-desist, claiming that the offset waist infringed on its Jazzmaster patent.

By early 1967, Murph had spread itself too thin, with 14 models and variations of guitars and basses, as well as 10 amplifier variants. The last Murph concept to surface before the company went under was the heart-shaped model. In addition to the full-sized six- and 12-strings, a 3/4-scale “Baby Murph” six-string was in the works (with interest from the Mattel toy company), which was to come with a briefcase-sized amp/case.

Although the Murph’s “reverse V” body resembles the Swept-Wing’s (albeit sleeker and more graceful), and both first appeared in 1966, the principals apparently came upon their ideas independently. The most significant design flaw of the Murph is that its hollow body, which measures approximately 18″ x 12 1/2″, is no match for its solid, laminated, six-on-a-side headstock, which is a whopping 11 1/2″. Let go of the neck while playing, and it dips down like an oil derrick

When I interviewed Pat Murphy two decades ago, he speculated that, since guitars were produced in batches of 50, there was at least one run of heart-shaped models. So I was surprised when, after my columns appeared, no owners came out of the woodwork, and the only six-string version I know of later belonged to Deke Dickerson for a time. Because the heart-shaped models were the last Murph experiments, it’s more likely that the total of all variations was less than a dozen. In fact, they could all be viewed as essentially prototypes.

The “heart”-warming ending of this sunburst saga came when I wondered aloud how much my Jetsons-looking beaut was worth. The next thing I knew, Deke contacted McGonigal, who contacted Tim Murphy. The heart-shaped model was, in fact, the only type the family didn’t have in its own collection. By this time I figured I’d exploited the thing about as much as I could – in my publicity photo, my first CD booklet, my ’93 calendar, and even a full page in my “Bizarre Guitars” chapter of This Old Guitar. It was time to free this odd duck, and thanks to Deke and Dan, I was able to return it (for a price, mind you) to its original home.

See what I meant about the movie appeal? The only question is who’s going to play me on the silver screen. I’m thinking a combination of Rob Lowe and Daniel Day-Lewis.