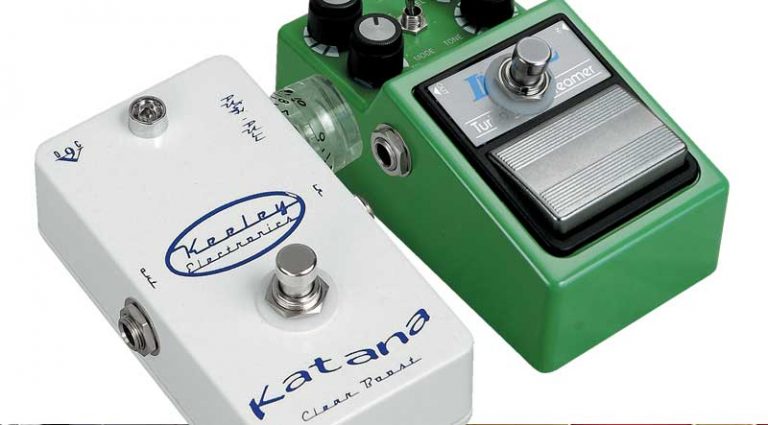 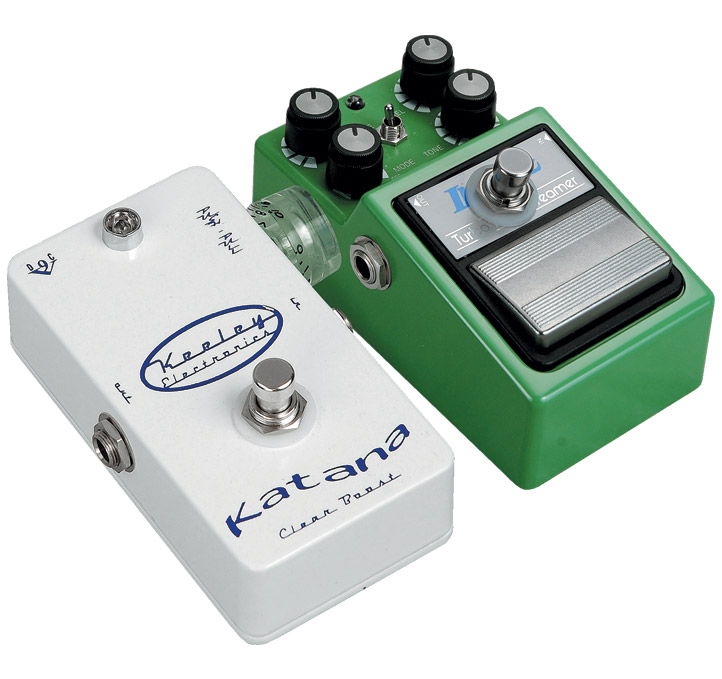 Any gearhead who’s been paying attention the last seven years knows the name Robert Keeley. Since 2001, he and his staff at Keeley Electronics have produced a variety of boutique effects pedals and pedal mods that are held in high regard.

Keeley is a degree-holding electronics engineer who was teaching college electronics courses when one day, in passing, he told his wife that he’d like to pick up a new compressor for his guitar amp. Her response came in the form of the question, “Can’t you just build it yourself?” Motivated by her remark, within months, Keeley Electronics was born.

On initial inspection, Keeley’s Katana pedal looks like a simple, small box with a knob on its side. Its simplicity, Keeley says, is key to its tone, and its secret ingredient is a voltage-doubler chip that steps up the pedal’s operating voltage from nine to 18 volts.

Housed in a 43/8” x 23/8” x 11/4” chassis, the pedal fits just about anywhere. The Katana employs true-bypass switching and Keeley’s signature blue LED indicator. On the side of its housing is a push/pull knob that acts as a level control, giving the user up to 23 db of boost.

We plugged the Katana between a PRS Custom 22 and  a Budda Superdrive 45 head going into an open-back 2×12″ cabinet. Running the amp’s clean channel, we set it to produce a basic slightly overdriven tone. We rolled the pedal’s volume control up until it matched the amp’s output, and were greeted with exceptionally clear, transparent tone. As we dialed the knob up further, the rig continued to parlay every nuance the Budda offered, but at greater and greater volume.

We then dialed the amp for a more traditional clean tone and clicked the Katana’s push/pull to the out position. A gainier tone emerged immediately and proved to be very controllable – perfect for country players who want a little more edge for solos.

For many of the world’s most notable guitarists, the Ibanez TS9 has been a signal-chain staple. Keeley has been doing mods to TS9 (and Ibanez 808) pedals for years, and recently incorporated his Mod Plus and Baked Mod toggle switch to the TS9DX Turbo Tube Screamer. He calls it the Flexi 4×2.

The Flexi 4×2 at first appears stock except for the true-bypass switch installed just above the stock Ibanez stompswitch, a small two-way toggle on the top side panel, and again the signature blue LED. The chassis hosts the typical Drive, Level and Tone knobs, but arguably the best feature is the four-position Mode knob that selects gain settings ranging from (and labeled) TS9 (highest), Plus, Hot, and Turbo, all of which are modified. The toggle selects between Baked Mod and Mod Plus; the Baked Mod produces markedly more gain, while MOD Plus is cleaner, with more low-end response.

We plugged in a Fender 1960 Relic Stratocaster with Custom Shop pickups, set the Budda’s clean channel for slight breakup, and the Flexi 4×2’s levels at about 11 o’clock with the toggle in the down position and Mode set to Turbo. The pedal produced a standard TS9 tone with only a slight amount of bite – full and fat. Moving the Mode selector through the four stages reveals distinct sounds affiliated with each of the modes. Switching the toggle to the Baked Mod created a cascading effect, as if someone had plugged another TS-9 in front of this one. Moving through the modes, the pedal offered everything from a modern rock-style lead tone to a power blues Strat tone that would give any lead player lots of warm fuzzies! Between the four Mode types and the “pile on” boost of the toggle switch, the Flexi 4×2 offers a veritable smorgasbord of tones.

In a saturated boutique pedal/amp/guitar market, Robert Keeley and his gang are doing an exemplary job of keeping themselves atop the heap, and the Katana and Flexi 4×2 are two good reasons why. – Jason Lee Austin