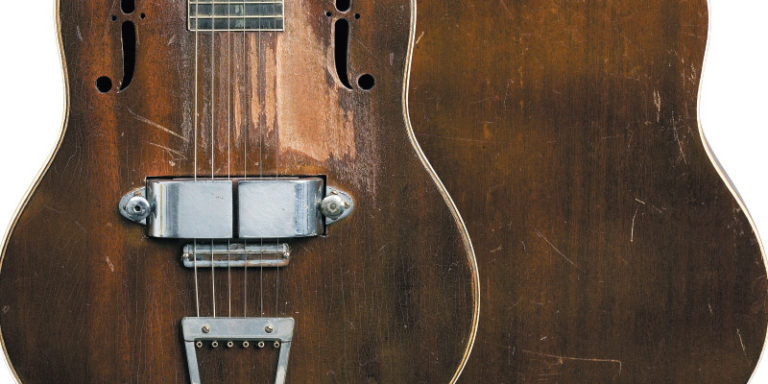 The story of George Beauchamp’s invention of what would become the first commercially successful electric guitar is shrouded in the mist of murky memory. But one critical element of the story – the first Spanish-neck electric guitar sold by Ro-Pat-In – has recently become more clear. As the first electric Spanish with a modern, string-driven, electromagnetic pickup, this guitar marks the beginning of the electric guitar era more so than the Hawaiian prototypes that preceded it. The guitars of Charlie Christian, Clapton, Hendrix, and every other guitar god all descended from this instrument.

Ironically, while the maker of this guitar (eventually known as Rickenbacker) remains a familiar name in the guitar world today, the groundbreaking musician who bought and played it was a now-obscure bandleader from Wichita, Kansas, named Gage Brewer.

By the fall of 1932, when Ro-Pat-In introduced its first instruments, the idea of an electric guitar was hardly a new concept. In interviews with Alvino Rey, who was using his Electro “Fry Pan” Hawaiian model in October, 1932, on his San Francisco-based radio show, Rey said, “I was playing my banjo electric in ’29 with [Phil] Spitalny in New York. All kinds of guys were winding coils back then. Old stuff.”

Research supports Rey’s memory. The March 1920 edition of The Electrical Experimenter magazine suggests inventive uses for the carbon button (the transmitting component of telephone mouthpieces and microphones), from eavesdropping on conversations to installing it in or on musical instruments. The article includes images of a violin and piano, along with diagrams of how to construct a system to amplify the signal. Earlier yet, patents from the early 1910s show the use of telephone transmitters placed inside instruments to transmit their musical vibrations. As Rey said, the idea of an electrically amplified instrument was truly “old stuff” by the early 1930s.

The earliest amplified guitars, introduced in the late ’20s, had a serious handicap; their pickups captured vibrations from the bridge or the top of the instrument, and the result was a weak signal. George Beauchamp’s decision to capture vibrations directly from the strings was reportedly inspired by an encounter with an electromagnetic phonograph pickup. In principle, he simply replaced the needle with a vibrating metal string. Unlike others who may have beaten him to the idea, Beauchamp was not only a musician (a former vaudeville performer) who understood the need, he also had the good fortune of being a partner in National Guitar, which provided him with an established manufacturing facility and distribution network.

The timeline of Beauchamp’s experiments is blurred by vague memories, but the idea was there by October 15, 1931, when Ro-Pat-In was formed, and instruments were on the market within one year. Beauchamp’s son, Nolan, remembers that Harry Watson, National shop foreman and Beauchamp’s drinking buddy, built the first test guitar in a few hours in Beauchamp’s garage, and that it was made of Douglas fir.

That test guitar is almost certainly not the wood-body Fry Pan that hangs in the Rickenbacker museum in Santa Ana, California, and is pictured on the cover of Richard Smith’s The Complete History of Rickenbacker Guitars (the source for much of this historical information). The museum guitar is reportedly made of maple, its body and neck are bound, the fingerboard is fretted, the peghead is slotted, and it has the remains of what is likely original finish. Its builders needed a band saw, binding router, dado (to slot the peghead, which looks an awful lot like a National peghead), fret saw, and painting facilities. It would have been one heck of a couple-hour garage project, even for the most skilled craftsman.

The museum guitar is obviously a prototype for the famous cast-aluminum “Fry Pan” model, but Ro-Pat-in also offered an electric with a conventional “Spanish” neck. The Spanish-neck pictured here was owned by bandleader Gage Brewer and it provides strong evidence that Ro-Pat-In introduced its Hawaiian and Spanish guitars concurrently.

Brewer was playing an electric guitar publicly at his Shadowland Dance Club in Wichita by October of ’32; his advertisement for a Halloween dance invited people who hadn’t already heard the new instrument to come witness it. Brewer was an energetic self-promoter with a connection to National – he owned a National tri-cone with his name engraved in the body – and a connection to Beauchamp through their mutual friend and Ro-Pat-In promoter Jack Miller. Although it seems unlikely that a local bandleader who never made a record or published a song would be on the cutting edge of guitar history, perhaps Brewer was just in the right place (Los Angeles) at the right time.

Every element of Brewer’s guitar is consistent with a prototype. For starters, the body and neck don’t go together. The wood body, designed for a tenor guitar, is the same shape as a National woodbody tenor and was probably a sample made by Harmony (minutes from National’s board of directors meetings mention Harmony as one of the companies that sent samples to National in an effort to land National’s business). The body has a dowel stick unique to National resonator instruments, and the 1/4″-thick top and back correspond to the spec required of National’s jobbers.

The 24-fret neck, very unusual for the period, joins the body at the 17th fret – a very odd place. But that’s what happens when a more standard guitar neck design is fitted to a body designed for a 23″-scale tenor neck. The neck is set so deeply that the top was removed where the fingerboard would rest, necessitating a 3″ x 31/2″ by 5/8″ plate glued under the top and butted up against the neck block to support the fingerboard. This inset fingerboard, along with a very low, hand-filed steel bridge, brought the strings very close to the top and suggests that perhaps the pickup’s height adjustment was an afterthought.

The top has a 5″ x 8″ x 1″ thick, five-ply plate glued to the inside, through which the hole for the pickup is cut. Oddly, this plate was designed so it could be glued to the dowel stick, allowing no movement of the top and making this instrument virtually a solidbody electric guitar.

All of the earliest known Ro-Pat-In examples are equipped with the familiar 1/4″ input we see on modern electric instruments. Not this test model, which employs “phone tips.” The height-adjustment brackets and the knurled tension adjusters are also different from those on all other known examples.

Speculation that this guitar might be the earliest Ro-Pat-In electric Spanish ended recently when Matthew Hill, curator of the Rickenbacker museum, confirmed it. In the company’s archives, Hill found a handwritten record from late September, 1932, of guitar #1, a Hawaiian model, going to Platt (a Los Angeles music store chain). Guitar #2, a Hawaiian, went to “G. Brewer.” Guitar #3, a Spanish model, also went to “G. Brewer.” Brewer’s guitar and his place in the history of the electric guitar are celebrated in the “Campaign for Volts – Wichita and the Electrification of the Guitar” exhibit at the Wichita-Sedgwick County Historical Museum, which runs through Halloween of this year.

Special thanks to Mike Newton. Learn more about the “Campaign for Volts! – Wichita and the Electrification of the Guitar” exhibit at wichitahistory.org.