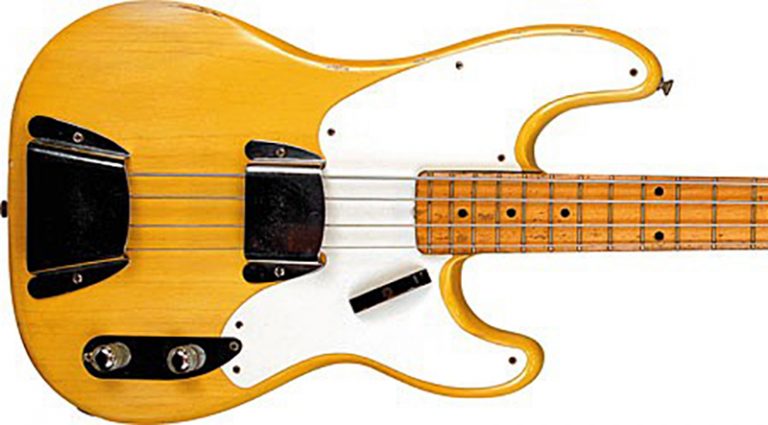 In the world of electric basses, the 1952 Fender Precision is the one that started it all.

While it’s true that Gibson, Rickenbacker, and Audiovox all built electric basses some years earlier, the instrument developed by Leo Fender and George Fullerton has always been considered the progenitor of the modern electric bass.

The Precision originally emulated many elements of its six-string sibling, including a maple neck with black dot fretboard markers, a “slab” body made of ash (finished in a dark blond that has come to be known as “butterscotch” in vintage-guitar parlance), black Bakelite pickguard, and through-the-body string loading. Electronics consisted of one single-coil pickup with level polepieces, and master volume and tone knobs mounted on a small metal plate. Its bridge had two pressed-fiber saddles, each handling two strings. A bridge cover and a handrest (covering the pickup) proffered an aerodynamic aesthetic (possibly to counter the “plank” designation some players used in reference to Fender’s slab-body instruments), and it had a finger rest on the treble side of the body. Its 34″ scale would ultimately become the industry standard.

And while its headstock looked similar to that on the Tele, the P-Bass didn’t look completely like a big brother, as it’s a double-cut instrument, with a large pickguard that covers both cutaway horns.

In 1954, the Precision underwent several significant changes, and while modifications to the Telecaster occurred around the same time, those on the P-Bass also owed a tip of the headstock to Fender’s newer solidbody guitar, the double-cut Stratocaster introduced the same year. Perhaps the most important change was the a forearm bevel on the front and a “belly cut” on the back, essentially matching the profile of the Stratocaster (some without the belly cut, known as “slab” bodies, were made as late as 1957).

There were cosmetic changes to the second generation P-Bass, as well. The standard finish became a yellow-and-brown sunburst, which was also standard on the Stratocaster, and its pickguard was changed to white (also per the Strat), though the P-Bass’ guard maintained its large silhouette. Blond became an optional finish and also took on a lighter shade, a la Telecaster finishes of the era (often dubbed “Tele blond”). Pickguards on contoured blond mid-’50s P-Basses remained black but were eventually also changed to white.

While the overall aesthetics of the mid-’50s P-Bass tilted more toward the Stratocaster instead of the Telecaster, its peghead retained the Tele-type profile.Other transitions happened in 1955, including steel bridge saddles replacing the pressed-fiber units, and the pickup was given staggered-height polepieces to better balance string output.

In 1956, Fender began offering the Precision in certain Dupont colors for an extra charge, though this had apparently been an unofficial policy all along. The option was supplanted by an official list of custom colors later in the ’50s.

The difference in comfort between the early- and mid-’50s P-Basses is obvious thanks to the contouring on the latter, but many mid-’50s examples also have the reputation of being surprisingly light.

In ’57, the Precision assumed the silhouette and electronics layout it has had since, including a split-coil pickup with two polepieces for each string, a smaller pickguard on which the control knobs were placed, and a headstock silhouette that matched the Stratocaster. The bass’ hardware and electronics have been improved over the decades, and there have been other changes and adjustments along the way, but a standard P-Bass today looks pretty much like the version introduced a half-century ago. And while Fender has reissued the early-’50s “slab” configuration of the Precision and the fully contoured late-’50s version, it has not reissued the mid-’50s variant, though the Sting signature model is inspired by it.

The in-between Precision was around about as long as the original, and proved the company was forging ahead with improvements that would make a huge impact on popular music.