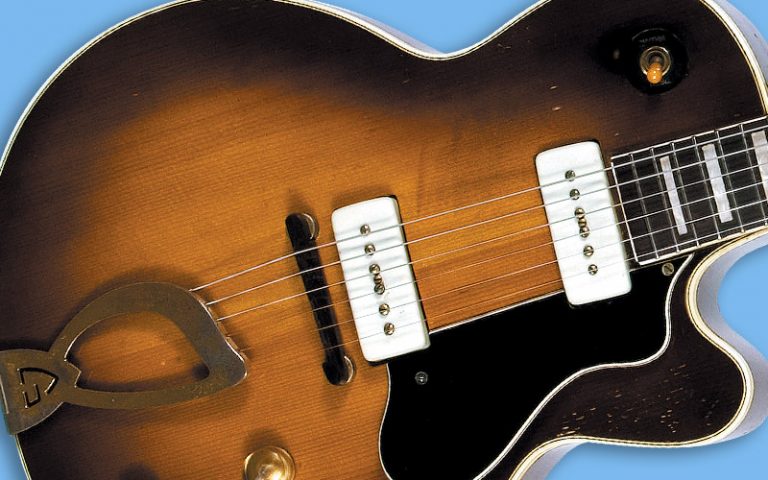 Guild didn’t intro-duce a true solidbody electric guitar until 1963, but the Aristocrat of 1954 gave the appearance that Guild was competing head-to-head with Gibson’s new Les Paul Model. However, with its hollowbody and spruce top, the Aristocrat was more than just an interesting variation – it was quite a different animal altogether.

Despite its small, single-cutaway body, the Aristocrat was probably not created as a direct reaction to the Les Paul. For starters, the Guild company was just being formed in 1952, when Gibson introduced the Les Paul. With the solidbody electric guitar still in its infancy and Guild being based in New York City, it’s likely that Guild founder Alfred Dronge paid little attention to the new solidbodies made in the hinterlands of Kalamazoo, Michigan, much less the crude “plank” solidbodies coming from Leo Fender’s upstart operation in California. However, when the Brooklyn-based Gretsch answered the Les Paul Model with a similar-looking Duo-Jet in ’53 – just as Guild was bringing its first guitars to market – the move undoubtedly got Dronge’s attention. The evidence lies in the Aristocrat, which is more closely related to the Duo-Jet than to the Les Paul.

Legendary Gibson president Ted McCarty stated that one of the reasons Gibson put a carved top on the Les Paul was that Fender didn’t have the experience or the tooling to copy it. Epiphone, Gibson’s arch rival in the archtop market of the pre-World War II era, obviously would have had the resources to copy the Les Paul, except for the fact that Epiphone had fallen on hard times, and production had been moved to a Conn facility in Philadelphia. When Epi’s key production employees refused to move, Albert Dronge seized the opportunity and staffed his new Guild company with experienced ex-Epiphone workers, so Guild was well-equipped to make a Les Paul-like guitar.

Guild debuted in ’53 with a full line of traditional hollowbody models, electric and acoustic. That year, Gretsch introduced its Duo-Jet, which had a body shaped like the Les Paul but with the significant difference of a routed mahogany back, which made for lighter weight and a different sound. A year later, Guild’s Aristocrat refined the concept with a routed mahogany back and an arched top of laminated spruce, plus a cutaway shape that was not copied from the Les Paul.

Guild’s pickups looked like the white “soapbar” single-coils of the Les Paul, but were made by the Franz company of Astoria, New York, and offered lower output than the Gibson P-90. The control configuration, with four knobs on the lower treble bout and the selector switch on the upper bass bout, was taken straight from the Les Paul. It would appear Guild was aiming at the same market as Gibson.

However, the market for a solidbody electric guitar was anybody’s guess in ’54. Fender’s early client base was in Western swing music. Gibson had Les Paul setting the example, but many early goldtops found their way into the hands of blues players. Rock and roll players didn’t exist yet; the term “rock and roll” had been coined just three years earlier. Bill Haley and the Comets didn’t record “Rock Around the Clock” until ’54, the same year Elvis recorded “That’s Alright,” and the memorable solos on both were played on hollowbody Gibsons.

So what sort of guitar players did Dronge have in mind for the Aristocrat? Quite possibly jazz players. Dronge was a fan of jazz, and Guild had inherited some of Epiphone’s reputation for jazz guitars. Not only the Aristocrat’s spruce top, but its rosewood height-adjustable bridge and harp-shaped tailpiece were hollowbody archtop features – jazz-guitar features – that distanced it from the Les Paul, which by ’54 had a stud-mounted “wraparound” bridge/tailpiece. When it came to performance, the Aristocrat’s body construction and pickups produced a thicker, mellower, somewhat muted sound – Guild’s catalog called it “a magnificence of tone never before achieved in a guitar of this size.”

Although its magnificence is arguable, it may well have been more appealing to jazz players than the sharper, more powerful sound of the Les Paul. Large block fingerboard inlays (pearloid, though, rather than mother-of-pearl) and gold-plated hardware had nothing to do with the Aristocrat’s sound, of course, but the ornamentation nevertheless gave it a classy look that would appeal to more sophisticated guitarists.

Introduced as the Aristocrat M-75, the model changed little through the 1950s, although the diagonally oriented script logo on this ’57 example was used only for a brief time. An optional natural finish was added in ’59 and Cherry finish in ’61. Guild dropped the Aristocrat in ’63, but it returned in ’67 under a new name – the BluesBird – still with the routed mahogany body with spruce top. Humbucking pickups replaced the soapbar single-coils, but otherwise, changes were cosmetic.

The BluesBird lasted only a year with the Aristocrat’s original construction. The ’68 version looked at first glance like the Aristocrat, but most examples from that year onward had a laminated maple body. Some tops were still spruce, while others were maple or mahogany. The hardware was downgraded to chrome-plated in 1970 and the model renamed M-75 Standard to delineate it from the new M-75 Deluxe, which had gold-plated hardware. At the same time, an M-75 Bluesbird with a fully solid body was added to the line. The hollow models only made it through 1971, while the solidbody continued to ’78.

Although the original Aristocrat style ended in 1967, the concept kept coming back. The M-75 solidbody returned in name only, with a poplar body and features designed by Brian Setzer, from 1984 to ’88. A truer-to-original version with a maple top and a mahogany back routed with tone chambers reappeared as the Nightbird in 1985 and lasted until ’95, then came back again from ’97 to 2003 under the Bluesbird name. Through it all, the original Aristocrat design maintains its own unique appeal one of the earliest guitars to bridge hollow- and solidbody design.

This article originally appeared in VG‘s August 2008 issue. All copyrights are by the author and Vintage Guitar magazine. Unauthorized replication or use is strictly prohibited.