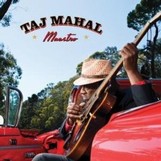 While not a great Taj Mahal album, this is a very nice tribute to a guy who’s been serving up great music for as long as most of us have been listening. The songs are fine and guest artists show up to tip their caps to Taj while helping make good music.

Fuzzy guitar tones, killer harp, and inspired vocals from Taj and Ben Harper are all that’s needed on cuts like “Dust Me Down.” Los Lobos do backup vocals on a couple – one the (surprisingly) island-like “Never Let You Go,” the other a stompin’ blues called “TV Mama.”

Other highlights include the musical contributions of the New Orleans Social Club, which includes Ivan Neville, George Porter, Leo Nocentelli, Henry Butler, and Raymond Weber. They tear through a fine version of “Hello Josephine” and the Mahal original “I Can Make You Happy.” There are other nice guest shots from Ziggy Marley, Angelique Kidjo, and Jack Johnson. Taj is mostly backed by the Phantom Blues Band, which includes Johnny Lee Schell on guitar.

As with almost every Taj album, there are moments of fun and frivolity. He slips into a deep Howlin’ Wolf growl on two cuts, and he has a great line about rapper P.Diddy on the classic “Diddy Wah Diddy.”

Again, this isn’t his best work, but it stands with other contemporary efforts.