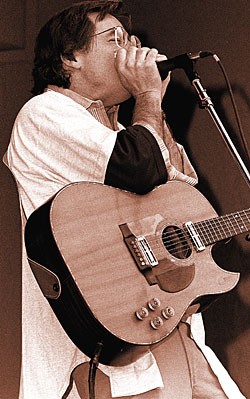 “Musical style has such a short shelf life. In that year and a half, I lost vital time.”

The timeframe John Sebastian is speaking of is the period between him leaving the Lovin’ Spoonful and his first legitimate solo album being released on Warner Brothers’ Reprise imprint. Actually, John B. Sebastian was finished by 1969, but a dispute with MGM, who claimed he owed them product as part of its contract with the Spoonful, resulted in MGM releasing the LP before Warner head Mo Ostin bought Sebastian’s contract and put it out on Reprise, finally, in 1970.

The John B. album – which may be the only album to feature session work by Crosby, Stills & Nash and the Ikettes, not to mention pedal-steel icon Buddy Emmons and folk’s ultimate accompanist, Bruce Langhorne – was cut mostly in L.A. Sebastian was New York, born and bred. During the Folk Boom, within a four-block radius of his home were the Sunday get-togethers in Washington Square Park, the Playhouse Café, Gerde’s Folk City, and the Spoonful’s future home base, the Night Owl. “I was 16 in 1960,” he marvels. “It was so perfect.”

But the paradigm shifted. “In 1969, right after Woodstock, I was touring my ass off, not really living anywhere,” he explains. “But a friend let me put up a tent on a hill overlooking the Burbank television studios. So I had this bi-coastal life, living in a one-bedroom apartment in New York with [future wife] Catherine and in a tent in L.A. But within four months after Woodstock, I was talking with Paul Rothchild a lot about the West Coast, and how everything was suddenly there. New York City just wasn’t the place for a few years.”

Rothchild produced the first three of Sebastian’s five Reprise albums from the early ’70s, which have just been reissued on Collectors’ Choice Music.

Still having problems with MGM, who released a live bootleg, Sebastian reasoned, “I’ve got to have a decent live album out there.” In ’71, he put out Cheapo-Cheapo Productions Presents Real Live John Sebastian. Accompanied only by pianist Paul Harris, Sebastian mixed new songs with Spoonful songs, folk-blues, rockabilly, and doo-wop oldies, in an intimate, spontaneous set highlighting his self-contained fingerpicking style. “The two heroes I was seeing and imitating were Lightning Hopkins and John Hurt,” he stresses.

Of note is the Lucien Barnes acoustic he used on the LP. “That guitar solved tremendous problems for me. I had a Heritage model Gibson, but what I wanted, essentially, was an amplified Advanced Jumbo. Lucien was a triple Pisces and I’m a Pisces, so we put several fish inlays on the fingerboard, and Lucien glued two DeArmond pickups onto the top. The treble pickup was totally useless, but the neck pickup was heaven. So everyone considered this ‘an acoustic concert,’ but I was running a magnetic pickup into an amp. It sounded great through anything!”

Another instrument that makes an appearance on the live album is a “guitar-bass” designed by Dan Armstrong. Sebastian details: “Dan’s idea was to use two bass strings on the bottom E and A, tune the two middle strings an octave up, the way Nashville tuning would be, and then the high B and E were back to a normal guitar. So you’ve got information from three octaves.”

This was a precursor to the so-called “baritone guitar” that Sebastian helped pioneer. “Even in the Spoonful, we were capoing a Fender 6-string bass,” he points out. “So I went back to doing that, playing by myself, to make a bigger sound. I had Tom Vinci make a set of strings that went A to A. Then I talked to Villette Citron, and brought my Guild Thunderbird down – the ‘shark’ shape – and they designed an instrument with about a 29″ scale. Joe Villette and Harvey Citron went their separate ways, and I’ve used instruments from both guys. Eventually, Villette came up with a 27″ scale, and said, ‘What about B to B?’ Because my other problem was, with an .080 for a bass string and a .016 on the top, I couldn’t get through a tour with a set of fingernails.”

His next studio effort, 1971’s The Four Of Us was essentially a band effort with Harris and Dallas Taylor (soon to become Manassas), bassist Kenny Altman, and Sebastian on guitar, featuring the Esso Trinidad Steel Drum Band on the “Domenica” section of the 17-minute title suite. Hard-rockin’ cuts like “Black Snake Blues,” “Well, Well, Well,” and “Lashes LaRue” show off Sebastian’s solid lead work, on his Les Paul Special.

That 1974’s Tarzana Kid was the one album that failed to even chart is mystifying. The caliber and variety of sidemen and eclectic mix of old and new material is uncannily like Maria Muldaur’s self-titled album released the same year, also on Reprise. In fact, both projects utilized Amos Garrett, David Grisman, Ry Cooder, David Lindley, Jim Gordon, and others.

The album, which reunited Sebastian with producer Erik Jacobsen, “who was like the ‘Fifth Beatle’ in the Spoonful,” opens with Jimmy Cliff’s “Sitting In Limbo,” marking one of the first stabs at reggae by an established rocker – the same year that Eric Clapton released 461 Ocean Boulevard with “I Shot The Sheriff.”

“Now, we’re unfortunately getting into the politics of the music business,” Sebastian reveals. “I think Warner Bros. kind of decided I had peaked, so there really wasn’t much of a push on that album.”

The company did an about-face, albeit briefly, when requests started coming in for the TV theme Sebastian wrote and recorded for the series “Welcome Back, Kotter.” The hastily released single climbed to #1, but the Welcome Back album stalled at #79. Produced by songwriter Steve Barri, it featured the Toto rhythm section a couple of years before that group formed. “That same year, I went to see Boz Scaggs doing ‘Lowdown,'” Sebastian recalls. “I’d die for that groove. And it’s all Jeff Porcaro and David Hungate. So I had tremendous players.”

But the record company’s attention was turning to other things.

“I had certainly had the best of the ’60s-type album budgets, where you had all the time you needed, and Paul Rothchild’s producership went a long way,” Sebastian recounts. “But I hadn’t been able to get anyone on the phone, so I went into Warner Brothers one day, and there, above the secretary’s desk, was a huge poster of Alice Cooper. I remember looking at that picture and thinking, ‘It’s going to be hard to be John Sebastian for a while.'”

He adds with a chuckle, “I think I still owe Warner Brothers $100,000. Go figure. I’d love to see the accounting on this stuff.”

The real bottom line, however, is that this “stuff” holds up amazingly well.


This article originally appeared in VG‘s April 2007 issue. All copyrights are by the author and Vintage Guitar magazine. Unauthorized replication or use is strictly prohibited.
John Sebastian – rainbows all over your blues

Farewell to a Venture