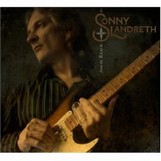 Sonny Landreth records are typically gems, and this one is no exception. This time out, he has written songs for folks he admires, then invited them to play them with him; Eric Clapton, Robben Ford, Vince Gill, Dr. John, Eric Johnson, Mark Knopfler, and Jimmy Buffett all contribute. The results are interesting, and at the high level you’d expect. The cuts with guitarists find the guest and the host sharing time. “Blue Tarp Blues,” a minor-key lament about the aftermath of Hurricane Katrina, features fine playing by Landreth and Knopfler. As we expect from Landreth, the slide guitar is soulful and blistering. Clapton appears on the pop-rocker “When I Still Had You,” which has interesting changes and intertwining guitars that in a different era would have been an instant radio hit. The two also trade licks on the droning minor blues of “Storm of Worry.”

Landreth not only plays with, but tips his musical cap to Eric Johnson on the instrumental “The Milky Way Home.” It’s the kind of song Johnson might write, and both are fabulous on the cut. Ford pops up on two cuts, “Way Past Long” and “Blue Angel.” The former is a shuffle with a great lyric. Landreth’s slide solo is nasty, with great tone, while Ford darts in and out with his typical jazz/blues eloquence. The country tune “The Goin’ On” lets Vince Gill, who’s often not given enough credit for his playing, cut loose with a big solo that’s full of grit and harmony.

“All-star” albums like this often fail miserably. But Landreth’s fine songwriting, combined with great playing by all concerned, turn this effort into a true experience.