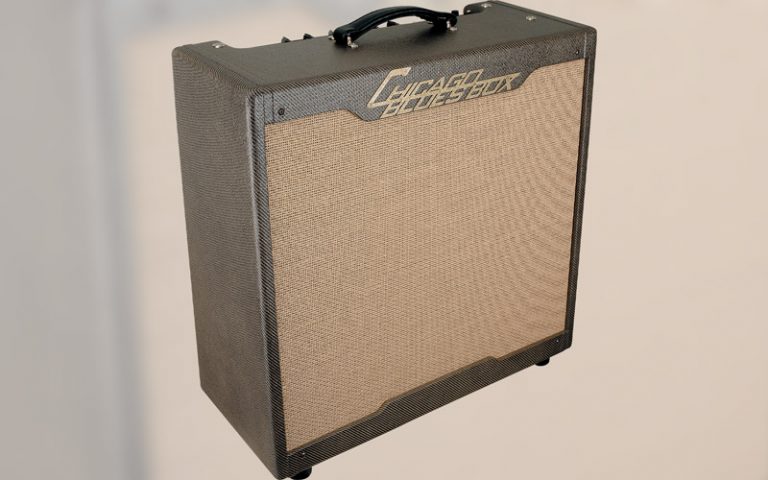 Whether you’re a blues guitarist, jazz guy, or a power-chord rock player, certain players draw your attention, whether for the style, songs, or tone.

Given Buddy Guy’s status, it’s fitting that the Chicago-based amp builder Butler Custom Sound recently teamed up with the master to put his name on one of their Chicago Blues Box amplifiers.

Aesthetically, the Buddy Guy Signature tosses a nostalgic nod to the tweed Bassman. Its finger-jointed pine cabinet is covered in tweed and sprayed in a tinted lacquer that gives it an aged vibe, which is further enhanced by its cane grill. The cabinet has an overall very solid feel.

Rather than trying to duplicate the circuitry of Guy’s ’59 Bassman, the team at CBB decided to replicate its tones by using custom-made components and their own circuit to match some of the characteristics of the 47-year-old amp. In the process, Butler spared no expense and cut no corners. One example is the Buddy Guy’s pots, which are custom-made and hand-assembled by CTS to match the actual drifting values in the originals! After measuring the impedance of the pots in Guy’s Bassman (which were original), he sent measurements to an engineer at CTS who was familiar with the company’s assembly process in 1959. After several attempts, CTS was able to re-create the values and build pots with a separate carbon wafer tabbed over the structural mounting wafer.

The amp’s controls include Volume, Treble, Mid, Bass, and Presence and with inputs for Normal and Bright channels. Bias controls allow for individual tube biasing. It uses two TAD 6L6 tubes, with three 12AX7s in the preamp section. The sound is then pushed through four 10″ Jensen P10R reissue Alnico-magnet speakers.

Hand-assembled pots, high-end transformers and alnico speakers aside, CBB engineered this amp to be not only tonally superior in a world of Bassman wannabes, but built it to be rugged – it does indeed have a very solid feel, especially when you consider that the cabinet is pine, which is a relatively lightweight wood.
To test the amp, we plugged in a Fender 1960 Relic Stratocaster with Fender Custom Shop pickups, and a G&L ASAT Deluxe with Seymour Duncans. Running first through the Normal input, we set all of the dials to straight up 12 o’clock, powered it up, and were immediately greeted with a finely balanced sound. Even at low volume, the low-end, midrange, and high-frequency sounds projected evenly. As we struck a single note, the amp offered a majestic sustain that would put a smile on the face of even the most stringent stickler. Dialing the Bass control up added great thickness to the tone without muddying it up at all, while moving the Treble up gave us that terrific, oh-so-popular Fenderish bite, reminding us yet again why these amps are such a staple.

Like any good amp, the CBB Buddy Guy is very responsive, which means the player has tremendous control over his tone simply by manipulating the guitar’s Volume knob. Even at low output levels, the guitar’s inherent tones were never compromised by this amp.

Turning up the Volume revealed a ton of head room; striking a chord, we could hear every note, especially at higher volumes. Bumping up the volume added a subtle old-school gain to the tone, and as we moved through different pickup configurations on the Strat, we could quickly achieve tones that any blues or country player would love.

With the G&L, we first tried the humbuckers through the amp’s Bright side, and got a pleasant non-overbearing bite that evened out nicely with the humbuckers. With just minor tweaking, we dialed in a terrific, fat rhythm sound. Playing with the Presence control gave the tone more life. The amp definitely did not play favorites to either pickup type. The amp loved them all!

Noodling through this amp in the studio, we couldn’t resist laying down a few tracks. For the session player, our results were dream-like. Leaving everything at 12 o’clock left a terrific rhythm and lead tone.

The CBB Buddy Guy Signature Amp is a straight-up, straightforward tone machine that offers all the tone and character that draws players to tweed-era amps, but with the benefit of modern circuitry.

Whether in a studio or live setting, it offers an array of tones, combined with a well-built, lighter-weight cabinet designed to last on the road. Yes, even in the jaded world of boutique amps, the price tag could induce sticker shock. But then, how do you put a price on the type of tone that inspires a player to be their best, or maybe even go beyond what they thought possible? – Jason Lee Austin