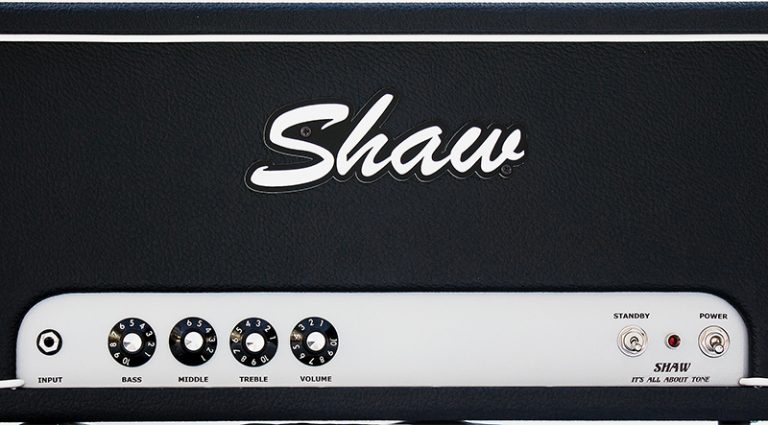 Tennessee amp builder Kevin Shaw loves restoring old cars – and creating fine-sounding amplifiers. His ToneRod SE and Fulltilt 18 helped establish him as a factor among amp builders, and his latest offering is (as the name implies) a bass head – the Audio Bass 130.

Among modern Class D bass heads, and their enormous output power, tone is sometimes overlooked. But Shaw approached the Audio Bass 130 inspired by one of the most legendary bass tones ever – the Ampeg B-15 flip-top – and, thanks to the state of technology, his rendition has plenty of punch.

The Bass 130 utilizes an old-school preamp design in a pair of octal 6SL7 preamp tubes mated to a Baxandall bass/treble tone stack marked as singular Bass and Treble knobs on the front panel. From there, Shaw added a six-position rotary mid-switch to the tone stack, giving it six midrange contours depending on the bass and treble settings. The Midrange knob is the Bass 130’s secret weapon and begins to show the amp’s diversity. While bassists will immediately be able to dial up the flip-top, the added luxury of the six-position rotary switch opens up tones which, while reminiscent of other classics, are pure Shaw. The circuitry all feeds four 6550 power tubes and a custom Mercury Magnetics output transformer.

An inspection of the head’s back reveals more Shaw craftsmanship, clean and geared toward real-world function. Tolex matched with an aluminum chassis gives that traditional vibe most players love. A couple of very player-friendly options are also noticeable. The first is a dedicated 1/4″ direct out that allows the player to connect to a direct box and send the Bass 130’s signal to the PA. This is a welcome addition that most vintage heads don’t offer. The addition of an XLR-balanced out could have improved the design, but Shaw counteracts this with the second player-friendly option: separate speaker outputs for 2-, 4-, and 8-ohm cabinets that allow bassists to mix and match cabinets. Simple yet brilliant.

The Bass 130 was tested in the studio and extensively on tour. From the get-go, it displayed tons of classic tube tones. The tone has that flip-top vibe that bassists have flocked to for years, but the top end response is also notable – pleasant yet not harsh like some tube amps that produce a brittleness unsuitable for some modern playing styles. The more the amp settled in, the more girth it achieved. And, as with all great tube amps, the more it was pushed, the more character it displayed. Surprisingly the 130 watts weren’t an issue in a number of venues.

The six-way Midrange knob made the amp extra special, not only in helping to dial in a room but also in adapting to a variety of different basses, including active five-strings, which typically do not cooperate well with vintage heads. Only at wide-open levels did the Bass 130 start to break up a bit, but the six-way rotary tamed some of that. On the flip side, pushing the Bass 130 with an active J bass channels one of the best Geddy-Lee-type tones ever – as furry and thick as it gets.

The Bass 130 deserves consideration if you’re looking for a head with lots of natural characteristic and tone. The craftsmanship is superb, and no matter what bass is plugged into it, it will sound good. The Bass 130 won’t fill a stadium on its own, but it will hang in there much better than should be expected, and the tone is exceptional.