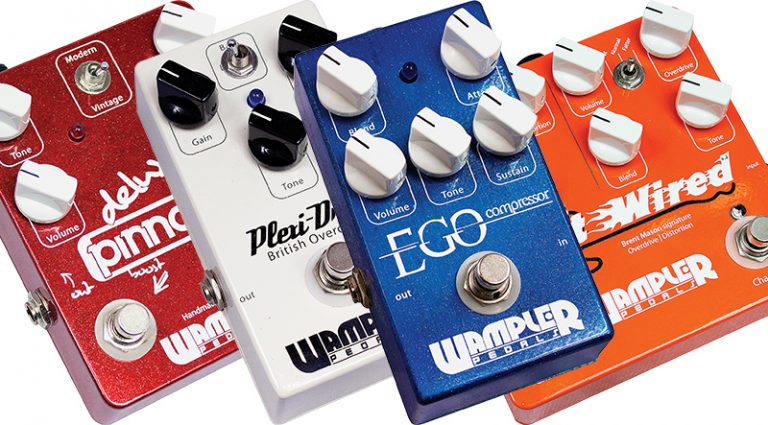 Brian Wampler, who developed a reputation first for modding effects pedals, then for building originals including a custom overdrive for heavy-hitter country picker Brad Paisley, plays by the rules set forth by the best boutique builders: employ first-rate components, true-bypass wiring, and excellent fit and finish. Instructions are clear and thorough, and Wampler even pays attention to ergonomics – controls are sized and spaced for ease of use.

Some of Wampler’s more recent offerings include the Ego Compressor, Plexi-Drive British Overdrive, Pinnacle Deluxe Distortion, and the Brent Mason Hot Wired V2 Overdrive/Distortion. Because certain pedals, amps, and guitars get along especially well, all four Wamplers were tested with a variety of rigs in settings both controlled and live. Guitars included an ash-bodied Fender American Deluxe Telecaster, a Fender Custom Shop Stratocaster, and a Gibson Les Paul Standard, all run through amps powered by 6L6, 6V6, EL34, and EL84 tubes. 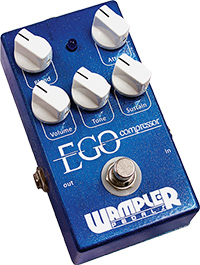 Ego Compressor
With Attack, Sustain, Tone, Volume, and Blend controls, Wampler’s Ego Compressor hints at versatility from the first look, and it doesn’t disappoint. All controls function with considerable (and very useful) range. Dialing in the Ego is straightforward, starting with the Attack and Sustain, then using the Blend, Volume, and Tone (which is more of a presence adjustment) to fine tune. The Blend control is key to achieving a natural sound, as it allows the blending of dry and compressed signals at any ratio, which helps create amazing playing dynamics while adding sustain and fullness.

The Ego can add shimmer and sparkle, bring back roundness and fullness, even out notes, and squash notes (if that’s what you’re going for). It’s one of those pedals that make playing more enjoyable. Truly good compressors are quiet and “transparent,” enhancing tone rather than significantly coloring or shaping it. The Ego does this very well. 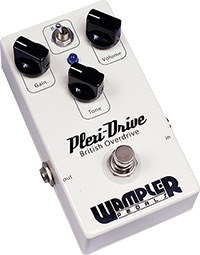 Plexi-Drive British Overdrive
The Plexi-Drive British Overdrive was designed to replicate the sound of a vintage Marshall JTM45. The pedal is easy to dial in, having just three controls – Gain, Tone, and Volume – along with a toggle for Bass Boost. While referencing vintage Marshall tones isn’t an exact science, certainly, this pedal offers classic Marshall voicing that was very useful and musical with every guitar and amp combination thrown at it. The pedal’s Gain control is very dynamic; not only can it drive the front end of an amp to a sweet, singing, harmonically rich tone while retaining note separation and definition, but at lower gain settings it has a very good clean-to-crunch range, which is what it was used for in live situations, as well as a slightly-higher-gain solo boost.

Another nice feature of the Plexi-Drive is the interaction of the Tone control and the Bass Boost switch. The Bass Boost adds low-end girth in a big (i.e., 4×12 stack) way. Combined with the Tone control, both deliver a ton of versatility for both single-coils and humbuckers. 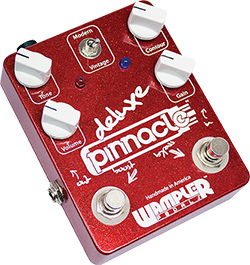 Pinnacle Deluxe Distortion
The Pinnacle Deluxe Distortion was intended to re-create Eddie Van Halen’s “brown sound” from the classic era of Van Halen. In addition to controls for Gain, Tone, Contour, and Volume, and a Vintage/Modern toggle that selects between two very distinct gain structures, the pedal has a footswitch boost (boost on the standard Pinnacle is provided via toggle). Much like the Plexi-Drive, the Gain adjustment on the Pinnacle is exceptionally good, and there are sweet spots depending on the rig.

Perhaps the Pinnacle Deluxe’s most valuable control is Contour, which varies the voicing (frequency) and tone emphasis from darker and distinctly midrange to a judiciously (in Vintage mode) scooped tone. The Tone control is remarkably complementary to the Contour, which allows a player to darken their tone significantly while retaining upper-mid and high-frequency clarity if desired.

Modern mode represents a significant shift in voicing; its tone is distinctly brighter and gainier, with increased low-end emphasis (think late ’80s and ’90s). Finally, the boost function is explicitly designed to boost gain, not volume, though at lower gain settings, it does increase volume.

Does the Pinnacle Deluxe nail Eddie’s brown sound? It’s close. More than that, though, it’s a great-sounding distortion with considerable flexibility that allows toggling between tones to cover ’80s and ’90s rock with almost no tweaking. 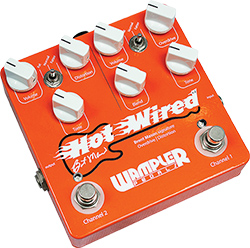 Brent Mason Hot Wired v2 Overdrive/Distortion
The Hot Wired v2 has separate Overdrive and Distortion channels (each with a toggle for Normal/Fat/Fatter) and is voiced with an emphasis on midrange tones that add serious meat while maintaining clarity and definition. The pedal sounded terrific with every amp and guitar combo, though a little will go a long way with an amp that favors midrange voicing.

The Overdrive channel has controls for Volume, Overdrive, Tone, and Blend adjustment. The Blend function is superb for dialing in the right mix of clean and drive, from subtle to out front. The toggle adds varying degrees of “fat” (but always tight) low-end without otherwise affecting tone. It fits perfectly, but is notably different from the Bass Boost on the Plexi-Drive, and rightfully so.

The Distortion channel retains the fundamental voicing, but picks up where Overdrive leaves off. Again, it has only three controls – Distortion, Tone, and Volume – and, like the Plexi-Drive, that’s all it needs. This channel screams, with an abundance of distortion. A moderate (noon to 2 o’clock) setting yields an aggressive, yet smooth, mid-rich distortion that is articulate and harmonic for individual notes; engaging the Fatter setting provided ample chunk to the bottom end. Stacking the channels was a treat for soloing, as it increased note clarity without diminishing overall tone. One must be mindful of the total gain dialed in between the two channels, as there is plenty available, and you can easily go overboard.

Regardless of one’s taste, or the tone “gap” one is looking to fill, the first-rate sound and build quality of Wampler pedals will fit the bill.