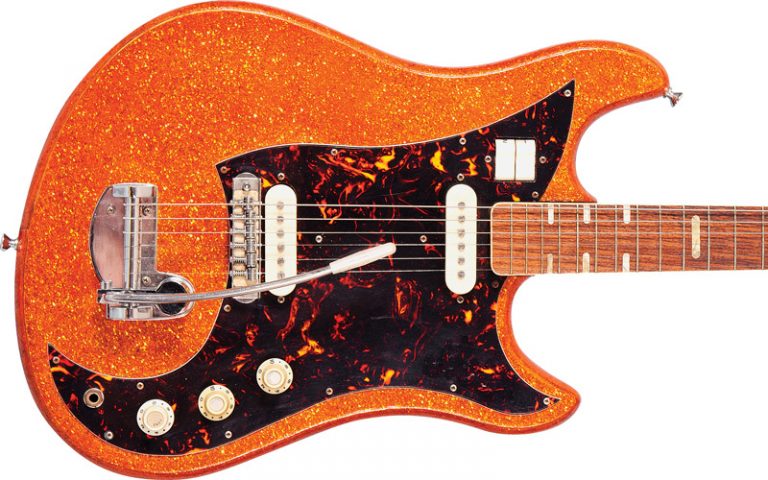 Everyone of a certain age – and no doubt some younger folks – remembers the sage career advice given young Benjamin Braddock in the classic film The Graduate: “Plastics.” In 1967, such wisdom was humorous because young people knew business was full of “plastic people” in suits.

So, it’s especially ironic that someone of a certain age would sing the praises of a plastic-covered guitar like this ’67 Norma EG 470-2 Deluxe!

Plastics are “pliable” substances, and there are two basic kinds – natural and synthetic, both made from a “resin.” Natural plastics are often made from tree (e.g., gutta percha, amber) or insect (shellac) secretions, and date back at least to ancient Egypt. Synthetic plastics are made from chemical compounds and date to the 19th century. Synthetics are either thermoplastic (heated, molded, cooled to harden) or thermoset (heated to harden).

Modern synthetic plastics came about as part of a natural-resources crisis inspired by (of all things) billiard balls. Billiards became popular in the 19th century, when the balls were carved from elephant ivory. You could get two or three from a single tusk, but it quickly became clear that there weren’t enough elephants to sustain the industry. So, one ball manufacturer offered a prize for a synthetic substitute. In 1869, American inventor John Wesley Hyatt devised celluloid, a thermoplastic. Basically, he broke down cotton into its primordial cell matter using acid to get cellulose nitrate, then combined it with camphor. He won the prize. The only problem was that early celluloid was highly combustible – not good for billiard balls! Improvements were made and celluloid was manufactured beginning in 1872. Celluloid appeared on guitars later in the 19th century as trapeze tailpieces.

In 1909, another American inventor, L.H. Baekeland, polymerized phenol and formaldehyde by a thermosetting process. His creation, Bakelite, is best-known for its use in another type of ball – for bowling – and telephones. Bakelite showed up on guitars as archtop pickguards, tuner buttons, a bridge made by Kay, and even as the structural material of early electric guitars (e.g. Rickenbacker) in the early 1930s. Bakelite had to be dark because of its composition, which is why its black or brown. A competing compound was developed that could be made a lighter color.

Today, guitars employ more-sophisticated plastics, however, they all derive from thermoplasts and thermosets.

This Norma is covered in sparkle celluloid – a basically clear substance to which other materials are added to create the color. Tortoise celluloid, for example, involves various shades of brown and tan material, and not stirring it too well. Metallic-gold celluloid appeared on guitars as trim in the 1920s and was called “tinsel.” It graduated to pickguards and faceplates in the ’50s. However, it was with European accordion making that application of celluloid as a “finish” began, again, in the 1920s, if not before. Ivoroid, made much like tortoise, was common, as was tinsel trim. It was the Swedish accordion maker Hagstrom that probably first applied the technique to guitars with the ’58 P-46 De Luxe. The technique proliferated in the early ’60s, spreading from Europe to Japan.

Which brings us back to Norma. If billiards created plastics, nuts and bolts created Norma guitars. Following World War II, a part of the restoration strategy for Japan was to build up manufacturing capabilities for export. By the ’50s, Japanese products began to appear in the US. In the late ’50s, a Chicagoan named Norman Sackheim started Heads and Threads to import Japanese nuts and bolts. He was successful and sold out in 1960, staying on as advisor for three years. At that time, the Beatles began to break. Sackheim met with Fred Targ, of music distributor Targ & Diner, who needed guitar suppliers. In ’64, Sackheim formed Strum & Drum and used his contacts in Japanese trade to find manufacturers, debuting Norma Big Value guitars the following year; many were sold to Targ & Diner.

The Norma Plas-Twinkle (seriously!) series appeared in 1967, ironically during the Summer of Love, when “plastic” was a pejorative and demand for guitars had begun to decline. Clearly, the inspiration was the Eko guitars of a few years earlier. The Plas-Twinkle Deluxes came in various sparkle celluloid finishes, including gold, red, and blue, and two, three, or four pickups, all with vibratos. Seen here is the Norma EG 470-2 Deluxe Two Pickup with Tremolo (sic). These were made by Tombo in Japan. The pickups are controlled by on/off rockers, with a master Volume and two Tone controls – basic but adequate. These often need a bit of setup, but play fine, though with limited tonal flexibility.

Strum & Drum continued importing guitars through the end of the decade, some quite noteworthy. American guitar making, especially at the lower-end, began unraveling shortly after the Plas-Twinkles. Valco purchased Kay in ’67 and went out of business in ’68 – the same year Strum & Drum purchased the Noble brand from accordion king Don Noble and put it on one of the first Japanese copies of the Mosrite Combo to appear in the U.S. In August of ’69, the assets of Valco/Kay were auctioned, and Strum & Drum purchased the National brand, which promptly found itself on some of the earliest copies of the Les Paul (Big Daddy, 1970) and Telecaster (Finger-Talker, ’71). By ’72, Strum & Drum was ready to get out of the guitar game and go back to nuts and bolts, and the Norma, Noble, and National brands went into hibernation.
Are Norma Plas-Twinkles rare? That’s difficult to say, given they had a run of a year or slightly more. There’s no way to tell how many were imported, much less sold. By ’67, demand for imported guitars was dropping. And while sparkle plastic guitars may have been cool when bands wore matching suits, they were unhip to youth in non-matching bell-bottom jeans with flowers in their hair. Normas were just too… well, “plastic!”

This article originally appeared in VG’s June 2014 issue. All copyrights are by the author and Vintage Guitar magazine. Unauthorized replication or use is strictly prohibited.