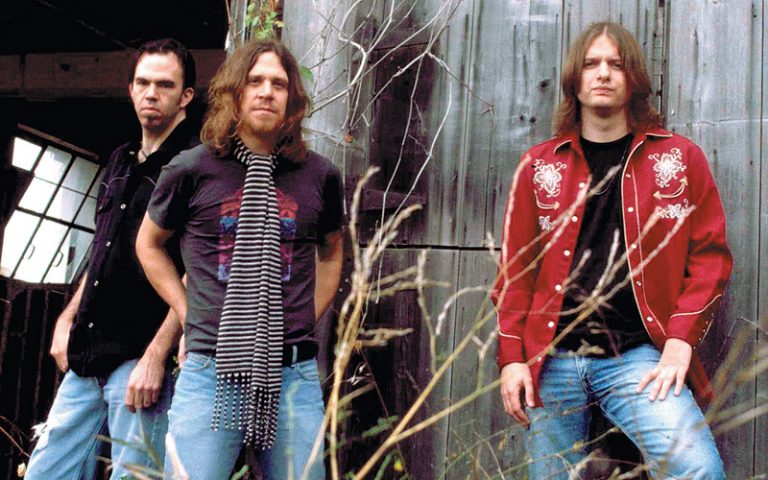 Taking a spin with Chicago sons The Steepwater Band and their latest CD, Revelation Sunday, is an experience akin to traversing the backroads of American blues and rock, then maybe crossing the pond for a close look at how certain British rock gods purveyed that music.

Guitarist Jeff Massey and bassist Tod Bowers are the heart and soul of Steepwater’s tone-darenched sound, and the duo makes no bones about the fact that their trio (completed by drummer Joe Winters) calls to mind a mix of Cream, Zeppelin, Free, and Skynyrd. And they do it with enough original flair and songcraft to make it fresh, original, and interesting.

We recently spoke with Massey and Bowers as they wrapped up their fifth full year as a band. Naturally, they were speaking from “the road,” where they played about one out of every three days in 2006. Massey was first up;

Vintage Guitar: So were you the guys who used to sneak into your big brother’s room when he wasn’t around, and listen to his albums?

Jeff Massey: I guess you could say that. For me, it was a combo of getting hand-me-down vinyl from my older brothers and sisters, and discovering music on my own. I still love listening to vinyl – there’s definitely a warmth to the sound that can’t be duplicated in any other way.

In reviews and other media, much is made of Steepwater’s classic/throwback sound and style. How do you describe its origins?

Well, we don’t deny having a lot of retro influences – we definitely have a love for traditional blues and the classic rock of the ’60s and ’70s.

And that shows, but still, your songs have a “newness” to them…

We like to think that’s because our main focus is to write songs and be ourselves in the process. Having an interest and foundation in classic roots music has been an inspiring place to build from. But really, we just get together and play.

VG has reviewed your last two albums, Dharmakaya, from 2003, and Revelation Sunday. In your own words, how do the two reflect your progress or growth as a band?

Dharmakaya might be a little slicker than Revelation Sunday, production-wise. The band returned to its original format as a trio before the recording of Revelation Sunday. Becoming a trio again was a re-birth of sorts, and it lit a fire under our asses. We also learned a lot from the producers who worked on Dharmakaya and we went in to Revelation Sunday with enough confidence to produce it ourselves, with the help of our drummer’s brother, Jim Winters. The result is a much rawer live sound, and the whole songwriting process flowed easier on this record. We’re proud of both recordings, but Revelation Sunday definitely represents where we’re at as a band at this point.

Who are some of your personal musical influences?

It’s hard to pinpoint just a couple, but if I had to choose, Jimmy Page would be the guy. He was the gateway to so many different musical styles. Whether I was conscious of it or not, when I discovered Page, I was discovering blues, country, reggae, funk, jazz, etc. I always loved the jack-of-all-trades approach and, of course, his songwriting abilities. I could make a list a mile long of players I admire, but those who can write a good tune always stand out to me. Of course, being a slide player, Duane Allman is also a huge inspiration, along with the classic blues players like Robert Johnson, Fred McDowell, etc. There are so many great guys!

Are there any particular songs, albums, or performers who have influenced your choice of guitars, amps, effects, etc.?

That’s hard to pinpoint, too. I’m a huge believer that a lot of your tone should come from your fingers… but a cool amp and guitar doesn’t hurt!

I’ve become big on old Fender amps. I own two late-’60s Super Reverbs and a ’66 Bassman that I’m very fond of. I guess I was drawn to the vintage Fender stuff from being into the blues. I really love the sound of humbuckers through a Fender tube amp – Freddie King has definitely been a factor in my digging that combo. I like old Marshalls, too – that’s the Page influence again – but don’t own one at the moment. As far as effects, I guess my love for the fuzz-based and occasional Univibe has come from Hendrix. I try to use effects sparingly, though, because there again, it’s more about what’s in the fingers.

Do you recall when, where, and why you scored your Les Paul?

I first played my Les Paul when I borrowed it from a friend, and then begged him to sell it to me. I fell in love with it instantly. It’s a ’72 Deluxe that was routed for humbuckers. It’s been through hell, but I love it. A cash deal behind a bar in a Chicago alley made it mine!

I’ve owned that one for years; I bought it from a former bandmate.

(laughs) Okay. And like Jeff, you’re obviously big on the vintage-gear vibe. When and where did you get your ’69 Gibson EB-2?

I found it about seven years ago at Player’s Guitars, on the south side of Chicago. I played a Fender Jazz Bass for years, and I was immediately attracted to the “bigness” of the EB-2’s hollow body. It’s so giant, and so warm.

And your backup is a newer Epiphone EB-3L…

I’ve only had that for about a year and a half. It has the same Gibson growl and warmth, but it also has the “honk” that only EB-3s have. I’m a huge fan of Jack Bruce and Andy Fraser, so I had to get one. I also recently got an Epiphone Jack Cassady bass.

Oh, those are very cool.

Yeah, I’m really diggin’ on it.

And that will never change. I might add to it sometime, but the head is only 50 watts, so it has a tendency to really break up – I love it. Some people think the bass should have a certain tone. But I disagree; if you listen to the best bass players – the legends – they all have a unique tone. From Jamerson to Flea, McCartney to Allen Woody. It’s always fun to check out other guys’ rigs, but for me, you can’t go wrong with a good old Ampeg tube amp. V-4s, B-25s, or SVTs – they all have that warm, tube-driven sound. – Ward Meeker