When you build guitars for a living, you might unwind with another hobby – say, beer-can collecting or crochet. Not Jeff Senn, mastermind behind Original Senn Guitars. He started a band.

Call it R&D or just plain fun, but Senn’s band, Crazy Aces, is a funky, kitschy ensemble that plays an amalgam of hard-driving surf, Japanese eleki, mod, Spaghetti Western, pyschedelia, and noir instrumentals. And Senn sculpted the sounds with an equally eclectic range of guitars.

He assembled Crazy Aces from friends and fellow pro musicians in Nashville – which Senn says was not an easy task. It seems counter-intuitive, but Music City is not an ideal place to start a band.

“Nashville is a music business city,” Senn explains. “As such, most musicians here play for a living – or are trying to. It can be difficult to find like-minded musicians who are interested in being part of a project that is if it doesn’t pay. A lot of musicians here play in touring bands, which keeps them gone too often to rehearse or book local shows.

“I believe a lot of players here feel they have to be on top of their game – you never know who’s watching and listening – and there’s a lot of truth to that thought process. But I also think that many of those same players don’t fully comprehend [playing] music for joy or fun anymore.”

Senn himself has worn many a hat in the biz. As a teen, he apprenticed repairing and building at Zon Guitars in Buffalo, New York, before moving to Nashville with sideman dreams. He was soon managing Gibson’s repair shop, before a decade-long stint on the road as a backing musician and guitar tech. In 2004, he established Original Senn Guitars, and has built instruments for everyone from Fogerty to Bruce Springsteen.

Now it was time to have some fun.

Crazy Ace’s debut CD brings them back to their musical roots – ’60s faves from the Ventures to the Astronauts, Duane Eddy to Link Wray. The result is their first album, cheekily named Greatest Hits Volume 2.

“I still wanted to play, but had a desire to take things back to the original reasons I played in the first place – love of the instrument, love of music, and just plain fun,” he said. “I asked myself, ‘What is it about guitar and guitar music that I want to express? What would be relevant to the sounds and tones that I loved to hear and make?’ At 46 years old, I wasn’t trying to prove anything to anyone or seek approval. I just wanted to have fun and experience that pure joy you get when making music you love. This thought process is what created Crazy Aces.”

“My Teiscos have been dear to me for years. I’ve re-fretted some of them and done some work to make them more reliable,” he enthuses. “The Teiscos are perfect for this music with their clarity and twang and vibrato bars.”

In addition, Senn employed a ’64 Harmony Stratotone and highly modified ’58 Danelectro/Silvertone U1, plus a ’53 Gibson CF-100 for all the acoustic tracking. A 2010 Gretsch White Falcon LTV and ’09 Jerry Jones electric 12- string rounded out the tones. 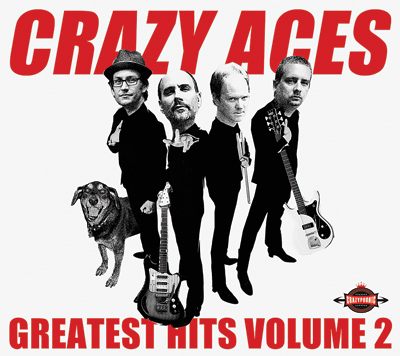 Not surprisingly, Senn also used one of his own handmade guitars, his 2011 JazzGuar.

“I really wanted a Jag, but I like the longer scale length of the Jazzmaster for more-authoritative, piano-like twang. So I built a 25.5″ scale Jag with steeper neck angle, special pickup placement, and an ABR-style Tune-O-Matic for more bridge-to-body contact instead of the bridge-to-metal contact of the originals.

“The bridge pickup is positioned slightly closer to the neck and therefore is a bit fuller and richer than a stock model. The neck pickup is directly under the second octave harmonic and because of this, highlights those overtones in a nice way. This positioning combined with the Jason Lollar pickups makes for a wonderful ‘old’ sounding guitar.”

He used the JazzGuar to create the Duane Eddy-style twang on Ennio Morricone-inspired “Eastwood Outlaw,” the ratty, fuzzed-out leads on “Arigato Terauchi,” and on “The Last Song” to get the Hank Marvin meets Santo and Johnny sounds.

“This was the MVP guitar of the record. It appears everywhere,” Senn says. “That guitar came through, and continues to inspire me.”