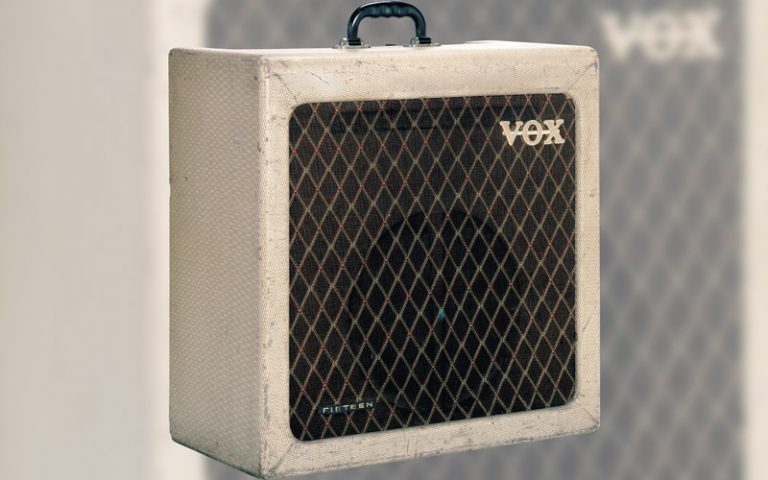 The Vox AC30 grabbed most of the headlines for years, but many tonehounds have come to appreciate the sweet, juicy glories of the smaller AC15, particularly in the wake of contemporary attitudes about smaller amps’ abilities to hit the sonic sweet spot at more ear- and mic-friendly volumes.

Designed by Dick Denney in 1957, the AC15 was the flagship of Tom Jennings’ Vox guitar amplifier line at the time, and served as the building block for bigger things to come. When popular British bands of the late 1950s such as The Shadows needed more powerful amps to help them be heard in the bigger and bigger venues they were playing, Denney doubled the power of the AC15 and coupled its preamp to the new AC30/4, with four EL84 output tubes and a firmer GZ34 rectifier. In 1960, however, he modified the larger amp’s preamp and tone stack, leaving the AC15 back in a tonal territory all its own.

Any player even vaguely familiar with this great British amp company will recognize some of the main ingredients of the “Vox sound” in the AC15. The amp uses a pair of EL84 tubes in cathode-bias with no negative feedback to produce 18 watts from an output stage that is commonly labeled “class A” – a term often misrepresented among amp makers today, but arguably more accurately rendered by this little combo designed 50 years ago. Rather than being just “half an AC30,” however, the AC15 includes a number of key ingredients that give it its own sonic signature. While the AC30’s gutsy Top Boost tone circuit (a variation of a cathode-follower tone stack) was considered Vox’s hot feature from the early 1960s onward and even into the boutique era of the past 15 years or so, the AC15’s Normal (or Brilliant) channel carried a powerful EF86 pentode tube that made this an even hotter preamp circuit. Coupled with the aforementioned EL84s in class A and a power supply that included both an EZ81 tube rectifier and a quality choke, the EF86 helped to make for an amplifier that was extremely fat, rich, tactile, and touch-sensitive, yet detailed and chiming, as well, and even the aluminum chassis that it was all rigged up in helped to make it a lively, breathy performer.

The Vib/Trem channel was built around a more common 12AX7 (ECC83) preamp tube, with another 12AX7 and a 12AU7 (ECC81) to perform vibrato and tremolo duties (legend has it that Denney discovered by a slip of the soldering iron that the tremolo circuit could easily be converted to vibrato, and adapted his design to make the two sounds switchable). The amp’s top panel carried a Speed control and a switch for Vib/Trem selection, but the depth was pre-set and could only be altered by accessing a trim pot on the circuit boards inside the chassis. Neither channel carried any tone controls as such, although there was a Brilliance (bright) switch for the Normal channel – on a rotary switch with a chickenhead knob, so it appears to be another control – and a Top Cut control for both channels, a very useful feature that dials out excessive highs in the output stage.

To further make the AC15 feel and sound like a big amp in a small package, Denney gave it a phase inverter (PI) circuit that has come to be known as the “long-tailed pair.” The topology, in fact, originates from an applications manual published by British valve manufacturer Mullard, and most other amp makers of the day (most notably Fender) reserved this elegant but more complex PI for their larger amps, using the more distortion-prone split-load inverter on anything under 35 watts. A long-tailed pair PI passes the EF86’s bold signal along to the EL84s without adding more than a minimum of its own coloration, and allows for a full-frequencied performance from this relatively small package. All told, a rare combination of qualities which together create an amp that is virtually unparalleled in the studio, and pure bliss to play cranked up in clubs and on small/medium stages.

Not that the bovine and succulent EF86 is without its problems. This tube is, by nature, prone to being microphonic, and even good NOS examples can become noisy or fail entirely when subjected to excessive vibration and physical jolts. This powerful little 9-pin pentode preamp tube appears in many tube hi-fi amps, but in that setting it is removed from speaker vibration and usually rests on a shelf for most of its operational life. Mount one in a guitar combo that’s tossed in and out of the van between sessions of high-decibel rocking, and it can suffer. Matchless was one of the few major amp makers to use the tube in the post-vintage era, to power the high-gain channel in the C30 series. Dr. Z’s Mike Zaite took up the cause a few years ago with the Route 66 and Z-28 models (which use the EF86 in a preamp design that is less prone to microphony), and more recently with the Stang Ray, which is based on the Normal channel of an early Vox AC30/4 owned by Brad Paisley. Otherwise, makers mostly steered clear for fear of trouble… until recently.

Over the past couple of years, the EF86 has come back into favor – particularly as used in the great AC15 circa 1960 – and outstanding new amps such as 65 Amps’ London 18, TopHat’s Supreme 16, and Gabriél’s Voxer 18 all pay homage in their own way to this Vox classic. And given the ever-escalating prices of original AC15s (it’s not unusual to see prices pushing $7,500), one of these newer handwired creations is, for many players, the best means of attaining a glimpse of that sound and feel without the risk of battering their pension to splinters on the road.

The AC15 was originally a 1×12″ combo, and a 2×12″ Twin version was offered later in the decade. As with the AC30, the speakers they carried played a huge part in the great sound they produced. Early Voxes sometimes had speakers from Goodmans or Fane, but circa 1960, AC15s and AC30s settled in with the legendary Celestion G12, dubbed the “Vox Blue” when re-badged by Vox, and often referred to today as the Alnico Blue (the name also used for Celestion’s fine reissue of the model). This efficient and aggressive speaker really helps these great amps to sing, and together they’re a tone template made in heaven.

Thanks to Vox aficionado Jim Elyea for the history fact-check and photo. Jim is the author of the forthcoming book, Vox Amps, the JMI Years.
Dave Hunter is an American musician and journalist who has worked in both Britain and the U.S. He’s a former editor of The Guitar Magazine (UK).