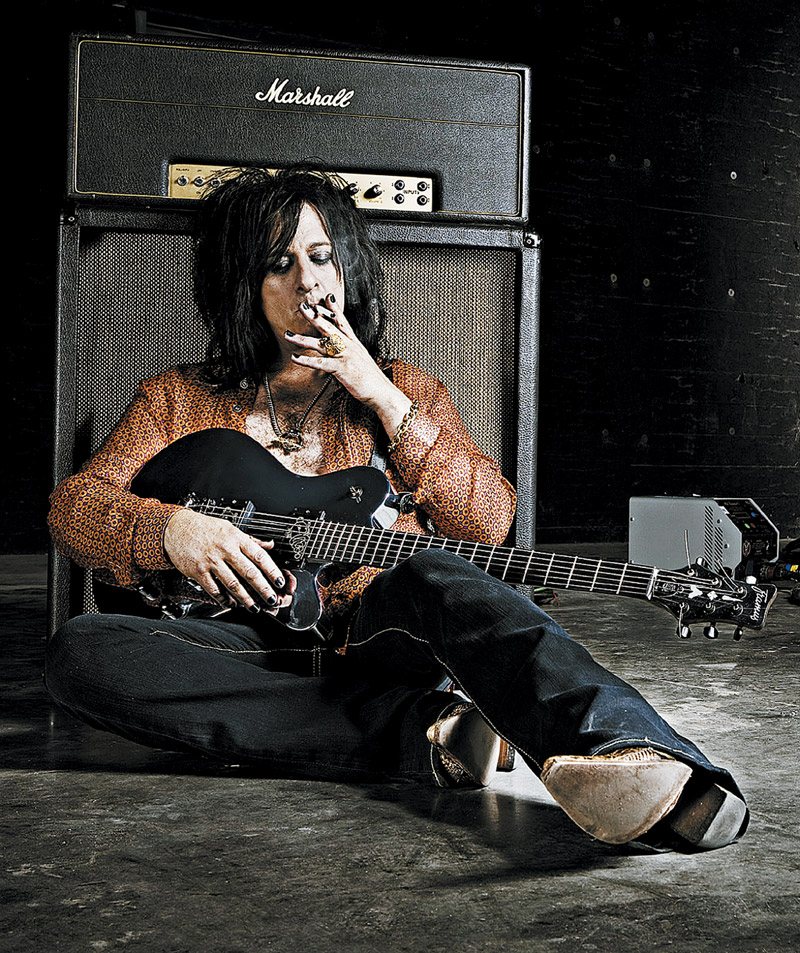 Best known as Billy Idol’s guitar ace for the past 25 years, Steve Stevens won early fame for Idol’s 1983 smash “Rebel Yell,” featuring his scorching licks and signature “ray gun” effects. Within a few years, he was among rock’s most in-demand axemen, recording with Michael Jackson, Robert Palmer, Joni Mitchell and his own group, the Atomic Playboys. Steve also led an interesting solo career, from his fiery acoustic Flamenco A Go-Go record to winning a Grammy from 1986’s “Top Gun Anthem.”

The guitarist has now come full circle with his latest release, Memory Crash, a high-powered album that captures the intensity of Steve’s best ’80s work and his always-inventive experiments with guitar effects.

What was your goal for this the record?

Initially my plan was to make the kind of record I grew up with – those early ’70s records with British guitar heroes like Robert Fripp, Steve Howe, and Brian May. It was a time when musicians were encouraged to be adventurous and I wanted to put a lot of stylistically eclectic things on this record. It’s also been 40 years since I picked up the guitar, so this is my homage to an instrument that still amazes me and one that I still have a love affair with.

Tell us why you covered Robin Trower’s “Day of the Eagle”?

Bridge of Sighs was a big seller back in the day and I still think it’s an amazing record. Unfortunately, Trower was incessantly compared to Jimi Hendrix, I guess because he got popular so soon after Jimi’s death. On the other hand, Stevie Ray Vaughan didn’t become popular until many years later, so I think he didn’t suffer the same slings and arrows as Trower did. But anyway, it’s a great song that I’ve wanted to cover for a while. And when I was told that Doug Pinnick of King’s X might be available, I thought he’d be perfect to sing and play bass. It was cut live in the studio with just one little overdub on the lead.

What effects did you use to approximate Trower’s stereo, flanging sound?

That’s a FoxRox TZF pedal, and I use it as an outboard effect in my studio, not through the guitar amp. I record my full-on amp sound first and then add in the TZF later for a more precise effect. It’s a great unit.

You’re known for using wild guitar effects. Do you spend a lot of time looking for new sounds and textures?

I do, but I like sounds that are still rooted in guitar effects from the late 1960s and ’70s, like UniVibes, fuzzboxes, and wahs. I mostly stay away from digital effects because they sound cold to me. I do use some Pro Tools plug-ins, but they’re most for really over-the-top sounds, like stutter edits.

What are some of your favorite effects?

I love ring modulators. It sort of allows you to set a pitch around a note in your solo and play against it. The Moog one is used in my live setup with an external pedal to vary the pitch. The one I used on this record is the Snarling Dogs Mold Spore wah/ring modulator. I’d love to get an old Maestro sometime, too. Some of my other favorite effects are a modified Vox wah and the Fulltone tape echo pedal. I just like the old analog stuff. When someone sends me a digital pedal that “can do every effect,” it just doesn’t do it for me. 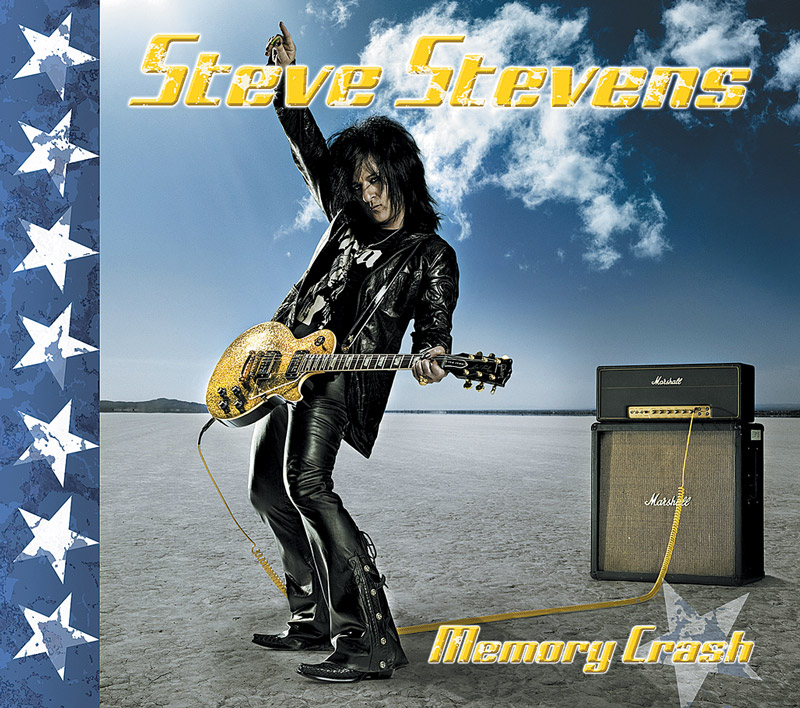 You get some great amplifier tones on the record. Did you use any software plug-in amps?

No, there are none – not even on bass. I’ve tried them, but there’s just this X factor of mic’ing up an amp and getting the air to move. This is all the more important when you record digitally. I’ve never found a software plug-in that can match a good guitar amp.

Do you collect vintage amps?

Definitely. At one point I had 12 old Marshalls and eight plexis, but I’ve pared it down to four plexis. The head I mostly used on this album was the same one I played on “Rebel Yell” 25 years ago – a 1970 Marshall Super Lead. For the album, we ran the Marshall on a Variac that we took down to about 95 volts. For cabinets, I used Bogner 2×12 cabs with Celestion Golds on one side and Weber Pre-Rolla speakers on the other. My favorite recording mic is a Royer ribbon unit.

I also have three old Park amps, and a Victoria Regal with a 15″ speaker, which is their take on an old Supro. Other amps included a John Suhr OD 100 and an 18-watt Suhr Badger, which is an incredible little amp. Also an old Rex five-watt amp made by Valco with a little elliptical Jensen speaker; I used it on “Hellcats Take the Highway” because I wanted to get that early Yardbirds sound.

Live, I use Randall amps, which are modular so, depending on the Billy Idol setlist, I can load modules for different songs, say if I need a Vox AC30 sound for one tune and a Marshall sound for another. It’s pretty useful.

What guitars did you use?

I used a Collings for all the acoustic parts and about four different Les Pauls, the oldest being from 1992. They’re all refretted with high frets because I find it better for finger vibrato. Most of them have my Bare Knuckle Rebel Yell humbuckers, which has a real midrange boost. But one has Bare Knuckles The Mule pickups. I also used an ’80s Charvel San Dimas with a Floyd Rose and Bare Knuckles VH2 pickups. I originally used that guitar on Billy Idol records and also the “Top Gun Anthem.” It sounds amazing.

For slide, I played a ’52 Gibson Console Grand T8 steel that has two necks with eight strings each. All of the clean, Strat-like tones come from a John Suhr with his noise-cancelling system. It works incredibly well. There’s even a new Framus.

Do you own any vintage guitars?

I have about 70 guitars, but not many are vintage. I once had a Veleno aluminum body, but I sold it – it weighed way too much. The only vintage guitar I still have is a 1976 Jose Ramirez classical. I saw a photo of Steve Howe playing a Ramirez and always wanted one – that’s the only guitar I use for my flamenco stuff. But I don’t really look for vintage guitars – I look for ones that sound good and play well.

When you think back on the ’80s and your run of fame with Billy Idol, what comes to mind?

I remember recording “Rebel Yell” at Electric Lady Studios with Dave Whitman, who worked with Led Zeppelin, Kiss, and Mahavishnu Orchestra. Then we toured for about 10 months. It was great, but I always considered myself more of a musician than a rock star. I knew there would be highs and lows. These days, as long as I’m playing music that challenges me and I’m playing to an audience that appreciates it, I’m happy. – Pete Prown