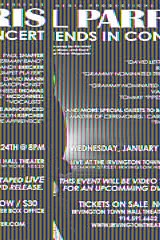 We’ve discussed Gil’s playing in these pages several times, and this DVD reinforces that use of ink.

Shot at the Irvington Town Hall Theater in Irvington, New York, it’s obvious Parris is among friends, not just on stage, but in the crowd. He takes them through a set that features saxophonist David Mann, Paul Schaffer, legendary trumpet player Randy Brecker, vocalist Vaneese Thomas, and former New York Yankee (and guitarist!) Bernie Williams… And his perfect mix of technique and feeling.

Parris is a smart player who finds pleasing ways to solo while always being imaginative and surprising. His imagination is matched only by his soulfulness. He has that innate feeling that other guitarists like Larry Carlton and Robben Ford do that lets him pour his feelings out through the instrument.

The program is varied. “When Love Was New.” is a jazzy ballad that’s a perfect showcase for his tasty playing and soul. Like many of the songs here, he and the band respond to each other beautifully. The solo builds as the band, with Matt King on keyboards, Kip Sophos on bass, and Thierry Arpino on drums, follow Gil through a series of emotional peaks and valleys that lets us know how good of a player he really is. Throughout the songs, Gil lets us see his jazzy side on cuts like “Blue Thumb,” which channels Wes Montgomery, and David Mann’s “Ostinato,” which is a plain-old fusion piece that sees both Mann and Parris shine on solos. We get to hear pop perfection on a cover of Bread’s “Make it With You” that features a killer vocal from Thomas and a gorgeous solo from Gil. Paul Schaffer looks like a mad scientist on Hammond as he joins the band for the soul/jazz corker “The Duck Walk,” and Parris even lets some country and soul roots show on “The Chock.”

This DVD is a perfect introduction to one of the finest players around.