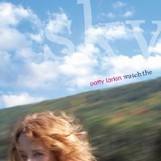 Patty Larkin is one of the finest acoustic guitarists in the world. On her 12th release, Watch The Sky, she focuses on her songwriting, singing, and multi-instrumental talents. The final results are as stellar as her guitar playing.

Unlike prior recordings, usually group efforts involving other musicians in a commercial studio environment, Watch The Sky was recorded in her home studio. Larkin plays acoustic and electric guitar, baritone guitar, lapsteel, national steel, bass, banjo, bouzouki, toy organ, percussion loops, and does all the vocals.

Although not intended as a concept album, many of the songs share a contemplative quality. The opener, “Phone Message,” revolves around an Indio/Celtic rhythmic pattern on synth drums and a textural bed of instruments that aren’t so much individual tracks as an environment for the melody to rest in. The second track, “Cover Me,” has a more traditional guitar-based structure, driven by vocals against a strong acoustic fingerpicking pattern. Other instruments, including baritone guitar, ride along deep in the background. And while this is a solo effort, the arrangements are anything but Spartan. “Beautiful” has so many layers and aural decoration it’s difficult to believe it was recorded by one person in a home studio.

Longtime fans may find Watch The Sky a bit of a leap from Larkin’s earlier releases, but after only a couple of listens they’ll be smitten by its songs and innovative arrangements.