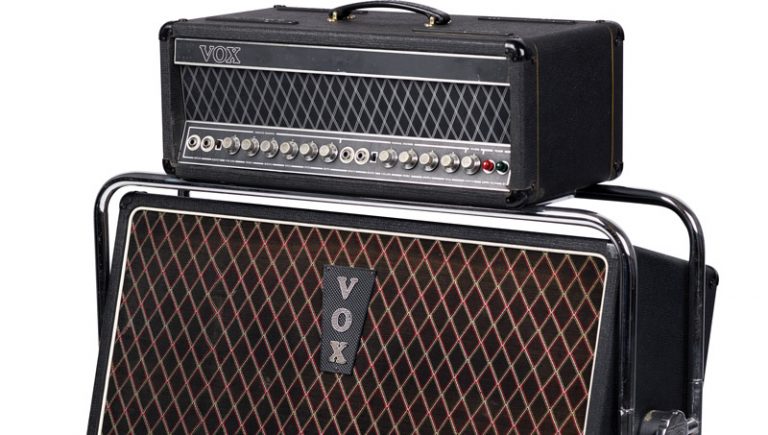 Despite the massive lust for early “copper-panel” Vox AC30 and AC15 amplifiers, one JMI-made line is far rarer – the 1966 “UL” series. More importantly, it represents a bridge between old technology and new, as well as early English JMI amps and their American usurpers.

In the case of this specific example – a ’66 UL 730 guitar head paired with a UL 430 bass cabinet – the amp represents the culmination of a passionate quest for a true Holy Grail of geardom and the dream of attaining the source of a legendary sound.

Despite the success of the seminal all-tube Vox amplifiers and the fact every guitar-wielding kid wanted one once The Beatles and other British beat sensations hit North America, amp technology by the early/mid ’60s was all about the march toward transistorization – solidstate.

JMI had been dabbling in solidstate since the early ’60s and even provided the transistorized T.60 bass amp that Paul McCartney used for several performances before giving it a thumbs down. Even so, every electronics designer worth his salt saw solidstate as the way forward, with transistor amplifier stages being touted as lighter, cooler-running, more reliable, and cheaper to produce. JMI’s partnership with Thomas Organ, in California, helped fulfill the great American need for Vox products and confirmed the tech evolution, the U.S. company having already been wholeheartedly invested in solidstate.

Underpinned by all of this, in ’66, JMI made its first move to new-tech Vox amps with the hybrid transistor/tube UL series, a moniker that stood for Underwriters Laboratory, the stamp given to electronics to indicate they achieved that institution’s safety standards for sale within the U.S. As the big transistors needed for powerful output stages weren’t yet fully reliable, however, JMI opted to segue toward solidstate with a transistor preamp fronting a tube output stage. At the center of the range stood the UL 730, intended to replace the legendary AC30; within the UL range, 7 denoted guitar amps while 4 indicated bass amps (the 430 cab seen here was acquired because no 730 cab could be found). The remaining numbers are derived from the RMS output rating – 30 watts.

This power was still generated by a quartet of EL84 tubes, as it was in the AC30, but the preamp, EQ stages, and built-in reverb, tremolo, and distortion circuits were all solidstate. In a sense, though, the UL amps made a mockery of the solidstate premise; while preamp transistors were indeed light, cool, and inexpensive, so were preamp tubes, relatively speaking, while their output tubes were delicate, produced a lot of heat and required heavy, expensive transformers. In addition, Vox’s ’66 catalog still carried the all-tube AC30 Top Boost head and 2×12 speaker cab as a set for £169, while the new UL 730 head and 2×12 cab was listed at £190. Regardless, JMI head Tom Jennings and chief designer Dick Denney had apparently seen the UL amps as transitional, and if that was the cost of the journey, so be it. Meanwhile, Denney used his legendary ear to voice the UL 730 as close as possible to the AC30 – with help from JMI’s Derek Underdown – and most accounts agree the amp sounded better than the disappointing solidstate designs that Thomas Organ was turning out badged (rather misleadingly from a sonic perspective) with the Vox brand.

As rich as this history might already be, there’s another draw driving fans of vintage-guitar tone to these rare amps… enter this startlingly pristine example.

“My love story with these amplifiers began the day I decided to investigate where the wonderful sound of The Beatles’ Revolver album came from,” says Marcel Cavallé, of Aclam Guitars, Barcelona, Spain, a company that designs guitar accessories and boutique amplifiers.

The Beatles had been touring with the larger UL 7120 and 4120 amps prior to recording Revolver, and some tracks might have been done with those amps. They appear in live footage and some studio and live stills from the era. But it’s widely believed that the Fab Four also used the 730 for some tracks, and again a year later for the Sgt. Pepper’s Lonely Hearts Club Band sessions.

And so, with Cavallé having set his heart on acquiring a ’66 UL 730, and having convinced the heads of Aclam Guitars that it would be a good idea to add the amp to the company’s gear collection, the rest should have been easy. After all, how difficult can it be to track down a half-solidstate Vox in Europe?

Turns out, very bloody difficult. Of approximately 100 UL 730s manufactured in ’66, a huge number were returned to JMI the following year once the full-fledged, all-solidstate replacement model came out. Cavallé’s research indicates that a mere 20 to 30 examples are likely to exist today. So, yeah, they’re pretty thin on the ground.

The quest appeared to have borne fruit when Cavallé tracked down what was advertised as a UL 730 head and speaker cabinet. He and the seller agreed to a price, and the rig was supposedly shipped, but when the cab arrived – after a long delay – it was the version designed to accompany the UL 430 bass head. The amp head never did surface. Still, Cavallé had something – and PayPal was able to get a refund for him.

Further searching eventually turned up a UL 730 head for sale in France. After a few inquiries and a long drive, the amp was his. The UL 730 did indeed deliver Beatles sound, as Cavallé had hoped. But getting there involved another journey.

“At the beginning, I was disappointed,” he said. “The tremolo, reverb, and distortion are not remarkable, to say the least, and the distortion is the most primitive I’ve ever listened to. It’s between fuzz and distortion. I don’t think the Beatles used the effects too much… maybe in the ‘Taxman’ solo, but it’s hard to control. At low volume, it’s not interesting. But played louder, when the amp itself starts to distort, things start to make sense. It’s the exact same sound you can hear in most of the Revolver songs. It’s a different overdrive. The sound of ‘Paperback Writer’ and all the rest. It’s so cool, that I was no longer disappointed, and actually had the feeling I have a treasure here.”