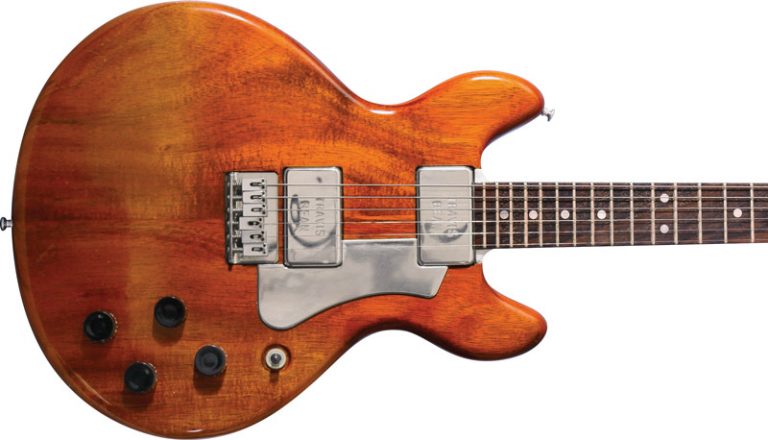 Guitar history is littered with “better ideas,” some of which stayed around, went nowhere, or went somewhere before landing in the boneyard to be occasionally reincarnated. A great example is the aluminum neck on this ’78 Travis Bean TB1000S.

Travis Bean guitars were one of the great ideas of the ’70s that promised to revolutionize electric guitars, found a moment in the sun, then drifted into legend. They were not, however, the first guitars to explore aluminum as a way to create a stiffer, better-sustaining neck.

Aluminum necks appear almost simultaneously on guitars made in Italy by Wandré Pioli, and in France by the Jacobacci Brothers. Pioli (1926-2004), who had a colorful life as a performance artist/designer, began making guitars in 1957. It’s not certain when he started using an aluminum frame on his necks, but at some point his had an aluminum core with a plastic back and rosewood fingerboards. In the early ’60s, Wandrés came to the U.S. branded as Noble guitars for Chicago accordionist Don Noble.

Vincenzo Jacobacci was a luthier from Catania, Sicily (a big guitar-making center), who, with the rise of fascism, left for Paris and in 1925 opened his own guitar, mandolin, and banjo shop. His sons, Roger and André, joined the shop and took over operations after World War II. In the mid ’50s, the Jacobaccis were awarded a contract to supply guitars to music retailer Major Conn. In ’58, they filed for a patent on carved aluminum necks and in ’59 their first aluminum-necked solidbody, the Major Ohio, debuted with bodies possibly sourced from Levin in Sweden. These were never exported to the U.S. and probably had no influence on later guitar makers.

John Veleno (b. 1934) was a guitar player from Massachusetts who moved to Florida in ’63, where he worked with aluminum in a machine shop and taught on the side. He fabricated an aluminum guitar-shaped mailbox to promote his sideline when some wag suggested he make a guitar out of aluminum. He finished one in ’67, and in 1970 began showing it to folks in the burgeoning St. Petersburg rock scene. Veleno guitars were carved out of aluminum and plated in chrome or other colors; John stopped making guitars in ’77.

Clifford Travis Bean (1947-2011) was variously a machinist, metal sculptor, motorcycle racer, movie-set builder, and rock drummer. In ’74, he hooked up with Marc McElwee and Gary Kramer to devise their aluminum neck concept. Only Kramer’s account is available, but he apparently financed the operation and went on the road to promote the guitars.

The concept behind Travis Bean guitars was described in their first brochure with a “manifesto” delving into the technical reasons for the idea. They argued that wood was inefficient, with portions of the string vibration dissipating into the headstock and body at the bridge. In addition, they argued, most guitars use pickups mounted in a plastic frame, which isolates them from the body. Their solution was to carve the head, neck, and bridge mount out of a single billet of Reynolds 6061-T6 aluminum, upon which the pickups are mounted. This makes a single, dense, metal base to control the entire string vibration top to bottom, plus it isolates the strings and pickup. All of this is set into a dense chunk of magnolia.

No reliable, detailed chronology of Travis Bean guitars has yet been written. Guitars began to be made in ’74 at 11761 Sheldon Street, Sun Valley, California, with the patent filed in October. Anecdotal accounts place the TB1000S as first guitar, followed soon by the TB1000A Artist and TB-2000 bass. The double-cut Standard had a slab body, while the Artist had a hand-carved/arched top. The bass had a slightly elongated offset body. The first price list was dated March, 1975, and had the Standard at $595, Artist at $895, and bass at $655; a case ran $95.

This Standard (serial number 1210, circa ’78) is a boss guitar. The epoxy-sealed pickups are not loud like a DiMarzio, but they’re clean and balanced, and the sustain is remarkable. Essentially, this idea worked extremely well. But, these guitars are heavy, and that doesn’t mean philosophically deep, as in “That’s heavy, man!”

According to Kramer, he returned from a sales trip to find Bean had filed for a patent in his own name – not all of theirs or the company’s. This precipitated Kramer’s exit and the formation of Kramer guitars in ’76, based on a similar concept. How Travis Bean was subsequently structured or financed remains to be learned, but it soldiered on.

Many pros appreciated their Travis Beans, including Jerry Garcia, Keith Richards, Bill Wyman, Joe Perry, Roger Fisher, and, later, Stanley Jordan. A better idea that was reincarnated by Kramer, Kramer co-founder Henry Vaccaro on his own aluminum-necks, and perhaps…