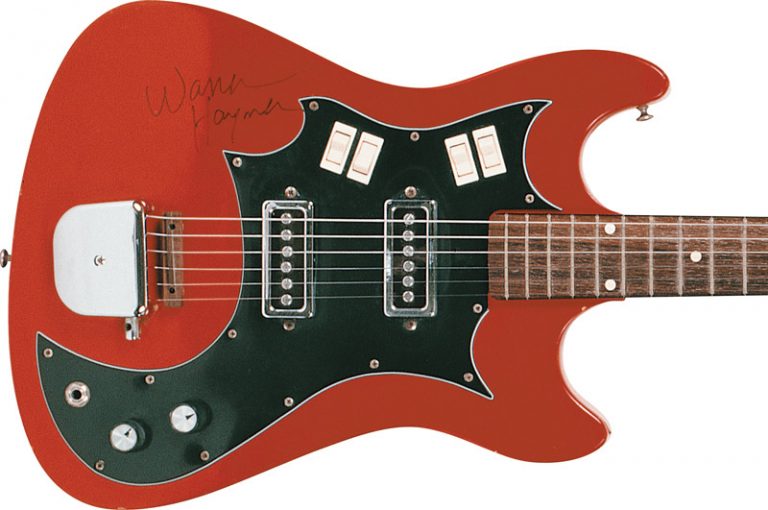 The year 1968 was not a good one for American manu-facturers of stringed instruments.M.C.A. closed the original Danelectro, and what was left of Kay and Valco was locked in a tailspin. Valco bought the remnants of Kay in ’67, and attempted to combine the brand with their own products, but to no avail.

This Truetone model (Western Auto house brand) confirms the exist-ence of such instruments. The strap buttons and rocker switches (pickup off/on and tone) are from Valco, while the rest of it appears to be from Kay, like the dinky wood bridge and cheapo vibrato. Even the red-and-black color scheme was seen on many other Kays of the era. The pickguard is a three-layer black/white/black unit… from Kay or Valco?

The neck appears to be Valco – note the “dragon snout” headstock, and zero fret. Adding to the intrigue is the bell-shaped truss rod cover (a Kay design) as well as the oddball “one-dot, two-dot” fret-board inlay. And for what it’s worth, the neck joint is the three-bolt Kay-type.

However, for all the speculation, this is basically a “floor sweep” instrument. Even Gibson and Fender have issued “floor sweep” guitars (the Swinger/Musiclander and the Firebird II are handy examples). But what’s so desirable about an instrument that, while rare or short-lived, was made to use up extraneous parts?

Other examples of “floor sweep”/ parts guitars dot American guitar chronology. For instance, leftover Danelectro parts often showed up on instruments carrying other brand names. The Bakersfield, California, area has a history of brands made from parts bought from failed builders. When one of the Standel guitar production facilities closed, former Mosrite employee Bill Gruggett bought vibratos from it to use on his instruments. Plus, some Mosrites appear to have been assembled in a slap-dash manner.

Speaking of Mosrite, any Acoustic -branded “Black Widow” that was supposedly made by Semie Moseley should be verified, as these were also made by a Far East manufacturer. The domestic-made examples have bridges and tailpieces that were exactly the same found on Mosrite instruments. Imported examples had different hardware, but there are imported Acoustic Black Widows labeled as having been made “…by Semie Moseley of Mosrite fame” (or words to that effect).

Anyway, Truetone-by-Kay/Valco guitars and basses might be unique, but how often are they are hyped as “experimental” or “custom-made?” Groan…

This article originally appeared in VG‘s November 2003 issue. All copyrights are by the author and Vintage Guitar magazine. Unauthorized replication or use is strictly prohibited.