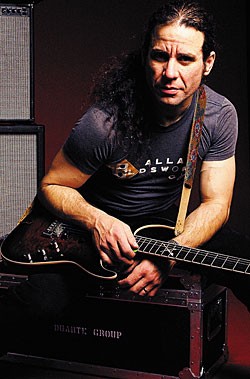 Blue Velocity, the latest record from the Chris Duarte Group, is a rarity in today’s music world – a knock-down, drag-out, “crank ‘er up and let ‘er rip” guitar album. And that’s how Duarte and producer Mike Varney wanted it.

“We weren’t striving for perfection, we were striving for emotion, you know?” Duarte said. “Part of it is guitar, that’s what Mike wanted. He realizes people love to come out and just hear me play. I really feel we accomplished that and made a really strong driving blues/rock album.”

One fact that might surprise Duarte fans and anyone who hears solo after blazing solo on the record is that his main love is playing rhythm guitar.

“I think it’s extremely important for people coming up in bands. You have to learn how to play with people and learn how to be in a support role. I always thought rhythm was way cooler than playing solos, although I love playing solos, too. I mean, you lay down a cool rhythm, and there’s nothing like it.”

Those unfamiliar with his background might also be surprised to learn that his first big gig after moving to Austin from San Antonio was in a jazz band. He was 17.

“I could read the chord charts in the Real Book,” he said. “Plus, I had a good memory. We would use charts, and the leader would call out the tunes. I’d be shuffling my papers and he’d give me that glare. I thought, ‘Hell with it!’ So I memorized all the songs. I could play whatever he decided to call out and not have to shuffle the charts.”

The move to the leader of a blues trio came later, while he was touring in a quartet. “The main guy was late for a gig and I had to cover. When I realized I was making the people happy and filling it up I thought maybe I could do this trio thing. I did it, even though I still held down some rhythm chairs in a couple of other bands.”

Duarte’s introduction to music came via television in the ’70s. “I saw Fiddler On the Roof, and one of the opening scenes is the fiddler silhouetted on the roof, playing that little riff. I thought that was so cool. So the next day, I went to school and said ‘I want to do violin.’ They said, ‘We don’t have violins, we have clarinets.’ I went home and told my mom, and she said, ‘Uh, no. We’re not gonna do that.’ But the seed had been planted, and later I got into the guitar and bands like the Beatles, Black Sabbath, the Stones, and AC/DC.” 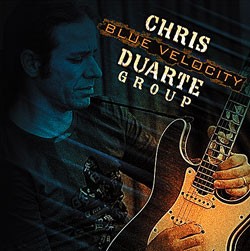 As for guitars, most of Duarte’s followers associate him with the ’63 Fender Stratocaster he has been playing for many years, but won’t be for much longer. “It’s on its last tour,” he said. “Some things have come up where it just can’t do it anymore. It’s so beat up. I’ve had the frets redone, but there’s nothing but a thin veneer of rosewood left and I don’t want to change the fretboard.” He also has a Hamiltone from 1995, and he makes frequent use of an Epiphone Les Paul. Then, he’s working closely with Xotic Guitars on a custom replacement for his Strat.

“They’re gonna measure the Strat and try to make me one. I’m really excited to see how it turns out – I told them, ‘If this works out, I’ll be the biggest poster boy you’ve ever seen!'” And if you know of his past, you know he loves to collect jazz boxes.

“I’ve got a Gibson ES-175, an Epiphone Emperor, a Washburn Montgomery, and one of the Japanese versions of the D’Angelico New Yorker. Whenever guitar companies come to me, I tell them ‘You gotta give me one of your big jazz boxes.'”

Duarte’s amp and pedal setup is a complex rig. He has two Randall RM50s, one a combo with a 15″ EV speaker, the other a head with a 4×12″ cab. The Randalls use preamp modules and adjustable tube configurations. There’s also a Marshall JCM and a blackface Fender Twin – the latter sees most of the action. The left side has a vintage Fender Vibroking. “The serial number is 0068, and I’ve been informed number 60 was the first allowed to the public,” he says of it. His rig also contains a Marshall JCM 900 that, while it may not have the highest reputation among Marshalls, Duarte has “learned to work it.” In a bit of an understatement, he redirects attention to his pedalboard by saying, “I seem to have a lot; I use a Boss DS-1 pedal, made in Japan. I’ve got two of those. I have a Boss CE-5 Chorus, a Boss DD-3 Digital Delay, a Glo Vibe Monkey Dance, which is like a Univibe. I have a Mutron Octave Divider, and a Granville Procrastinator, which simulates an Echoplex. At the very front of everything, I have a Cesar Diaz Texas Ranger pedal. Cesar gave me that. It’s always on the mid setting. It really gives a good boost to a single-coil pickup.”

Duarte’s new record comes at a time of big change in his life. After years of doing drugs, including heroin on-and-off, he has undergone treatment. “I feel great. I’ve dealt with my drug problem in a professional way. I went down to the Crossroads Center and it was just a life-changing experience. It’s a great center. I feel rejuvenated and regalvanized in life.”


This article originally appeared in VG‘s December 2007 issue. All copyrights are by the author and Vintage Guitar magazine. Unauthorized replication or use is strictly prohibited.