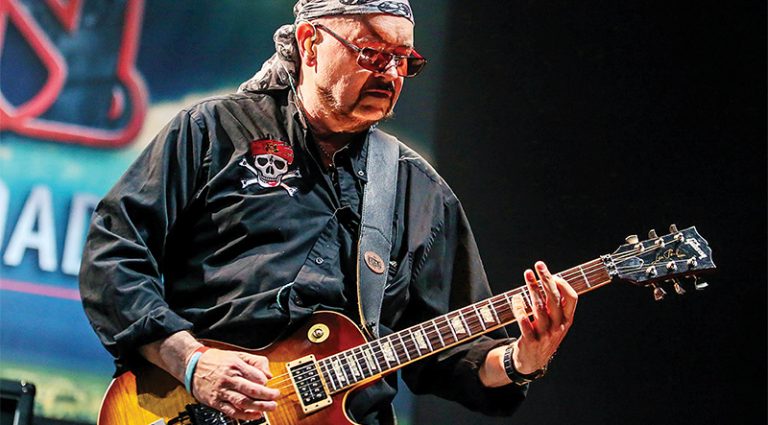 As one of the leading bands of the early-’80s New Wave of British Heavy Metal movement, Saxon is responsible for offering up such headbanging anthems as “Wheels of Steel,” “Strong Arm of the Law,” and “Denim and Leather.” Guitarist Paul Quinn has been contributing to the band’s riff department since its inception, paired first with Graham Oliver, then Doug Scarratt, and he continues today, as evidenced by the recent release of Battering Ram, the band’s 21st effort.

Which song from Battering Ram stands out for you?
I worked out a harmonized solo on “The Devil’s Footprint.” I went neo-classical, which I don’t normally do – such as Yngwie. But not his style, really – it’s more me. And harmonizing the solo, that could be a real difficult play if we ever do it live.

Which guitars, amps, and effects did you use?
In our back line we sampled our Marshalls – which are JVMs – into a preamplifier so we could have our effects in there, as well. A lot of it was actually DI’d, through a Marshall. All sorts [of guitars] – Les Pauls, some ESPs, and I had a few nice Vs lying around, so I took advantage of that.

Was it a mixture of vintage and newer guitars?
They were mostly newer models in this case. I can’t think of any vintage ones we used on this album. It’s hard to get them out of storage sometimes, a lot of them. They sound great, but you don’t want to knock them over, do you?

This year marks the 35th anniversary of the Wheels of Steel and Strong Arm of the Law albums. Did you have any idea at the time that they would eventually be considered metal classics?
I don’t think any band knows that, no. You can read articles with Queen, that they didn’t know that “Bohemian Rhapsody” was going to be that popular. You make the best you can make. After that, it’s down to managers and labels, whether they can give it the push it deserves.

Did you have a sense, though, that the material was a step up?
You could say that, yeah, because the first album [1979’s Saxon] is a little bit… it’s not particularly focused in style. So, the next two became more focused – more in the metal style than the prog style we had flaunted.

Early Saxon albums were loaded with great riffs and guitar parts. Were you and Graham Oliver in fierce competition?
No, we were friends (laughs). If somebody had an idea and laid it down, it was a mutual admiration rather than competition. I didn’t want to take all the solos, so I thought it was only right that we had an equal number.

What do you recall about the recording of the title track of Wheels of Steel?
I seem to remember that was done at a Welsh studio, which was run by hippies, up in the mountains. We came out with “Wheels of Steel,” “Suzie Hold On,” and “747” at that session. We wanted to get the hell out of there before we froze to death, so we recorded three songs in quick succession. We already had the ideas from writing sessions just waiting to be finished, basically.

Was the response to “Wheels of Steel” pretty immediate, live?
I would say so, yeah. It’s a classic title, isn’t it? It uses “metal” in the title, without mentioning metal. A lot of people thought it was a motorbike, but it was actually a Chevrolet.

What do you recall about writing the title track of Strong Arm of the Law?
I can recall that I basically was – and still am – very Hendrix-influenced, so the main chords to it are kind of influenced by the bridge in “Voodoo Child.” It’s very similar chords. I think English bands have a feeling for a shuffle. There’s a lot of bluesy-sounding English bands, and we like the blues, as well, so we went with that shuffle feel for it.

There was a punk influence and a back-to-basics songwriting approach with NWOBHM bands. Do you think that’s missing in modern-day metal?
I think in some ways, the punky element is missing from a lot of styles of music. I don’t want to name names, because I may annoy friends. But there’s a period of our lives where we were called Son of a Bitch. We used to call getting really aggressive “hitting bitch,” which doesn’t sound very politically correct in this day and age, but we would just put our heads down and go for it, basically. And we still do today, fortunately.