Home Music John Pizzarelli – With A Song In My Heart 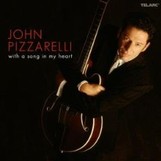 Not every artist could get away with releasing a series of tribute albums. John Pizzarelli can.

This one features 12 tunes by Richard Rodgers and all seem very heartfelt; for example, the title/opening cut, which swings fiercely. And while Pizzarelli’s vocals are not great, they’re always in the pocket. And really, we’re here for the guitar playing, Pizzarelli’s is certainly exciting. The solo is a monster, full of imagination, exhibiting tremendous chops, and again, he swings about as hard as a single player can.

Several cuts here share those traits. On some he scats to the solos. The jaunty “I Like to Recognize the Tune” is a perfect example, and lets the listener in on just how well Bucky’s boy can handle a rhythm. While a lot of the songs are familiar, he does take liberties with melodies. “The Lady Is a Tramp” could easily become cliché, but his vocal and a nice segment where he and his guitar trade fours with the horn section give it zip. He turns “Johnny One Note” into a Latin piece, and manages to slip Jobim’s “One Note Samba” in somehow, and the songs fit together well.

Bucky shows the kid a few things with his chordal accompaniment on “It’s Easy to Remember.” And the legendary Don Sebesky lends his hand on the arrangements of several tunes, which helps keep things fresh.

Should John work more on original stuff and maybe lay off the tributes? Perhaps. But as long as he’s creating music this fresh and playing guitar like one of the best in the field, what would be the point?