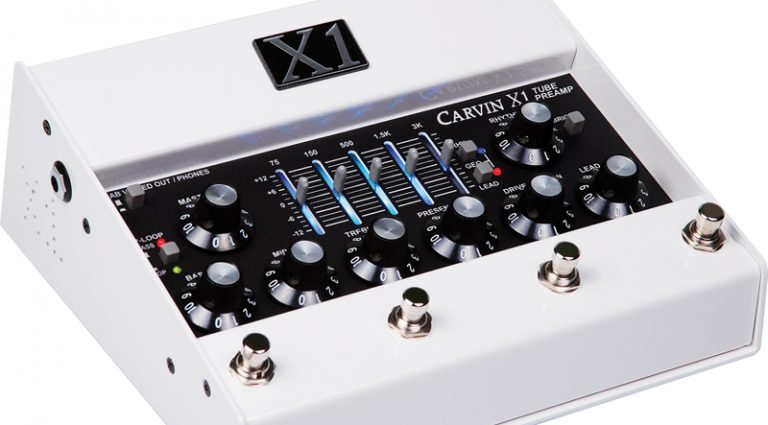 The recently re-tooled Carvin Audio has stayed active with product offerings aimed at the player/sound-reinforcement segment.

Its new X1 combines the front end of Carvin’s old X100B with cool tweaks like an all-tube (two-12AX7) preamp interacting with the X100B’s lead and rhythm channels, along with a five-band graphic EQ.

Designed to run into a guitar amp or stand-alone power amp and cab, its Cab Voiced output jack adds versatility by going straight to a mixer for recording or gigging; the user simply chooses between 2×12 or 4×12 cab simulation. The X1 even has its own 1-watt output for practicing through a cab.

There are two channels, plus an EQ on/off footswitch. Assign the EQ to either the Lead or Rhythm channel (or both) and then kick it in at just the right moment. For example, you can have a conventional rhythm tone but also an instantly deployable “scooped mid” setting. The Gain footswitch flips on the Drive control, pouring on more tube overdrive for solos. Between the EQ and Gain footswitches, the X1 could conceivably work as a four-channel preamp. Impressive.

Plugged in, the X1 can provide everything from shimmering cleans to massive metal crunch. The only debit of note is the surprising lack of an on/off switch. Other than that, it’s a fantastic return to form. As the guitar universe trends more to pedalboards, this powerful preamp fits in perfectly with the recent smaller-is-better mantra.