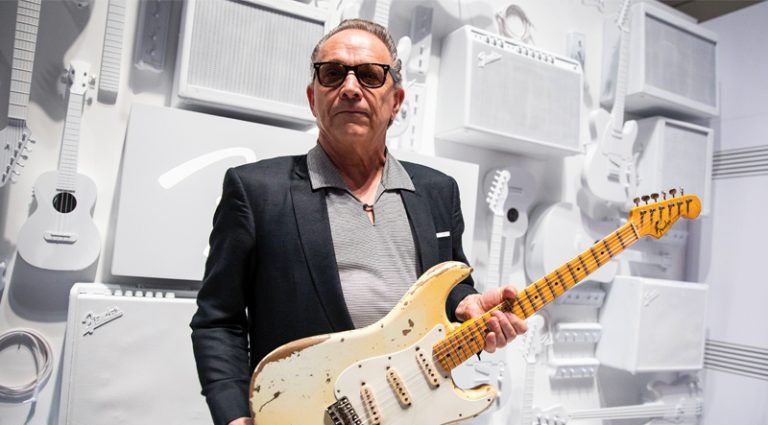 After trading football for guitar at age 13, Jimmie Vaughan forged a remarkable career as a blues-roots guitarist, first with The Fabulous Thunderbirds then with a string of solo records and the occasional collaboration. Today, his plate is full as ever – gigs, new music, and new limited-edition signature guitars from the Fender Custom Shop for both he and his late brother, Stevie Ray.

“It’s a trip, to say the least,” Vaughan said. “Fender came to Austin, and I dug up my guitar and Stevie’s guitar. They took them apart, photographed every inch, every scratch, measured everything, and duplicated them exactly. Those were the guitars we did the most road work with. They were like race cars. If it got a crack, you put a band-aid on it, because we were playing every night. We’d go away to play for two months and come back, and they’d be different; if the pickups quit, our tech, Rene Martinez would say, ‘I’ve got another one over here from so and so,’ and he’d solder it in. So they sort of evolved.”

You’ve played plenty of other guitars, but have always loved Strats.

The whole thing started when I was a kid. I wanted one of those blond ’57s that looked like a Mary Kaye. Gene Vincent played it in a black-and-white movie in the ’50s. To me, it’s the most beautiful thing; it’s a Stratocaster, it’s white, and it just looks cool. I love Gibsons and hollowbodies and all, but if you’ve got a good amp and you know how to work it, you can make that Stratocaster do almost any of that stuff.

The new guitar isn’t your first signature Strat. Talk about how the Jimmie Vaughan Tex-Mex came about in the ’90s.

When we did the Tex-Mex, Mike Lewis at Fender said ‘What do you change on your guitars?’ And I said put the Tone control on the treble pickup because I can get either all the way treble, full bright, or I can get a Telecaster sound by backing it down a little bit. It’s what we used to do on my guitars in the T-Birds – Rene figured that out. I never turn my guitar Volume all the way up; I keep the amp up and the guitar down, and it works good with the pickup, it’s a little overdriven. So he said, “We’ll experiment with this and put a few more windings on the treble pickup so that when you do turn the tone down, it’s a little bit louder; so the treble pickup has a little more horsepower.”

Your original Strat has been semi-retired, right?

Yeah, I haven’t used it in a few years. I’m always switching necks and doing stuff. That’s half the fun. That’s the great thing about Fenders; you can bolt them up, change this and change that, and you don’t have to be a genius. You can just fool with it.

Your classic sound is pretty straightforward. Which amps are you using now?

I’m playing new Fender Bassmans and my Grammaticos with a Strymon Flint Tremolo & Reverb. It’s a fabulous pedal; better than any I’ve had before. You’ve got all the different kinds of reverb and tremolo on there and they’re quiet and everything. It’s really great.

When you’re not on the road, you keep busy with a trio.

Yeah, with B-3 player Mike Flanigin. We’ve been playing in a little club in Austin called C-Boys, and we did a live record there last year. It’s fun because we can be playing along and we’re just one signal away from taking a left or right turn, and we do anything we can get away with. When we’re playing a lot of these gigs, different singers show up, so sometimes it’s like a revue because everybody stops by when they’re in town or between gigs. We still go on the road and we still have a great time, but when we play in this joint, you play all night and then you go home.

And you also have new record contract?

Yes, Proper Records plans to reissue all my old stuff and make new records. It’s very exciting for me. For my new record, I’ve got some new originals and a lot of old tunes I dug up. With me, it’s always a combination. I don’t want to get myself in a particular category or another, I want to be able to do anything as far as the band goes. I love playing with horns, I’ve got the greatest horn players right now and better musicians than I’ve ever had. I’m excited I feel like the sky’s the limit.”