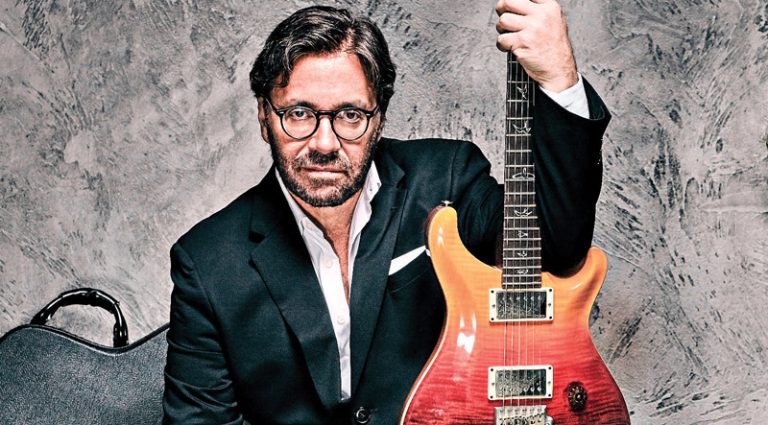 For close to 45 years, Al Di Meola’s career has brimmed with guitar virtuosity, taking him from red-hot fusion to enchanting Latin and world-music textures. After a few years touring with a full-on electric show, he’s now mixing acoustics and solidbodies on his latest, Opus. We caught up with the master as he prepared to venture out again, still revealing astonishing chops at age 63.

Fans of Di Meola’s early acoustic work will notice he favors nylon-string classical on the new album. But he misses that old Ovation steel-string attack.

“Steel versus nylon guitars are really like apples and oranges – I love both,” he said. “The nylon was an instrument I needed to graduate to because it’s far more difficult to execute on, technically. Once I got used to it, I felt more and more that the sound was better suited for the type of music I was composing. Recently though, I’ve come back to the steel-string little by little, and now I more or less switch back and forth depending on the composition. To be honest, I missed playing my Ovation.”

Di Meola has the same yin/yang between his Les Paul and PRS axes. Why does he grab one over the other?

“For me the difference is that the Les Paul has a slightly more growling bottom-end, while the PRS has a smoother and cleaner sustain with an incredible neck and a vibrato arm. Those are tonal differences, but I’ve been using more of the black single-cut PRS that Paul Smith made for me, commemorating the 40th anniversary of Elegant Gypsy.

Opus is also full of lush, mesmerizing compositions, such as “Ava’s Dream Sequence Lullaby,” which may bring to mind the rich film soundtracks of Ennio Morricone. Not surprisingly, the New Jersey guitarist is an admirer.

“I love Morricone’s compositions; in fact, I’ve been playing one recently, one of his more famous pieces from the movie Cinema Paradiso. I take the comparison as a welcome compliment, as I’m a fan of Ennio’s extensive body of work in film.”

One of his most renowned skills is his precise rhythmic sense and timing, heard particularly in the dark grooves of “Notorious.” Asked for tips on improving one’s rhythm chops, he said, “While sitting, I recommend that guitarists tap their foot in time while playing rhythms on the guitar. If the foot goes out of time because of a rhythm being played on the guitar, slow your tempo to the point where whatever you play on the instrument doesn’t influence the quarter note on your foot. If it’s still an issue after that, I highly recommend using a metronome.”

Beyond rhythm, Di Meola is legendary for his fast alternate-picking technique, something he developed a decade before the influx of ’80s shred guitarists. How does that speedy vintage era look to him now.

“I think the emphasis on displaying proficiency and technique in those early days was vital to what the jazz-rock fusion was all about. My influences were players with impeccable articulation and strangely, not guitar players – more often keyboard players like Chick Corea, Jan Hammer, or Keith Jarrett. Even drummers like Steve Gadd had a tremendous influence on my developing my guitar technique.”

While listening to the rhythms of Opus, you may further wonder about Di Meola’s relationship to a related artistic form – dance. How does dance figure into his playing and, dare we ask, does the virtuoso himself dance?

“I’ve given a lot of thought to collaborating with professional contemporary dancers, especially those who fuse the classical dance with elements of Latin tango and flamenco. That interests me quite a lot, and I can see that happening some day,” he said, adding with some amusement, “As for dancing myself, I don’t know of any musician who plays an instrument and can dance. Singers can dance, but not instrumentalists. My theory is based on the fact that, as instrumentalists, we feel everything above the waist and usually it looks corny when we actually try it. Now that I think about it, I don’t know of one guitar player that can dance!”