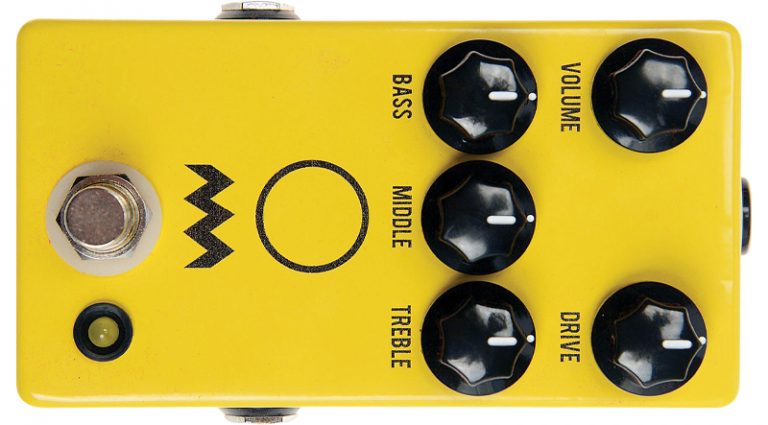 While few guitarists get the opportunity to plug into every vintage Marshall amp and hear their distinguishing tonal characteristics, most know a good crunchy stompbox when they hear it. The latest version of JHS’ Charlie Brown overdrive is billed with the ability to unleash the “sound and feel” of a ’60s Marshall JTM45; think Clapton in the ’60s, or Angus Young, Gary Moore, Hendrix, etc.

This, the fourth version of the Charlie Brown, is updated with a few smart additions. Aside from changing the box color to yellow (to match the iconic shirt of its namesake comic-strip character), JHS added Bass, Mid, and Treble controls, and juiced up its output for more headroom. It retained the handy LED and its Volume and Drive knobs.

Whether the Charlie Brown nails the charm of a vintage JTM45 is subjective, but what it does do extremely well is produce copious amounts of chunkalicious crunch just short of high-gain saturation. Plugged into a clean combo amp using single-coil or humbucker guitars, it produces rich lower-gain overdrive that transforms the personality of an amp, adding a thick shot of sustain and musicality. It also offers a smidgen of compression and midrange (which is a good thing!), and contours /focuses the quality of your note selection. Adjusting the EQ provides ranges of attack and substantive overtones with sparkling chime, as well as supple heat. It’s ideally suited for the British blues-rock stylist.

This iteration of the CBOD is a marvelous creation for discerning guitarists seeking sonic hues that exhibit subtlety, warmth, nuance, and delicious overtones. From light amp breakup for rhythm sounds to full-on lustrous filth for solos, guitars sing with clarity without resorting to supersaturated kids’ stuff.