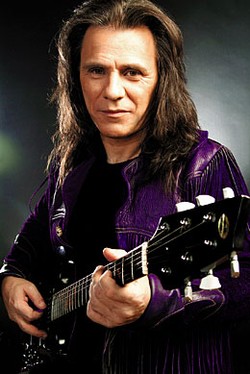 Marino was featured in VG in 1998 and has since, with his band, released a studio album and a double-disc live album.

Marino describes the studio effort, Eye of the Storm, as “The album Maxoom (Mahogany Rush’s first) should’ve been. It was a great record, but one I didn’t think I was making! It was made over a couple of years, and was just music I wanted to make. It became a real turning point, though, because I really got back into my roots – the psychedelic/blues/rock/jazz thing; a little farther from straight rock.”

Recent photos of Marino show him playing an SG with a custom pickguard, and a different pickup configuration and control layout.

“That was my experiment with Stratocaster-style single-coils,” the guitarist chuckled. “And for any guitar guys out there, don’t try this at home. I ruined two SGs doing it. When you put those pickups in, you (remove) too much wood near the neck joint. I didn’t realize that, and when I was playing, the neck came off of one. I’d put the other in a case, and the pressure from the case made the neck move forward. We had gigs coming up, and I had to get ’em filled with epoxy. I still use one, but I still don’t feel comfortable with it.”

These days, Marino relies primarily on an SG with PAFs and a hollowbody SG-style guitar made by Jim Glynn, which Marino says is, “…super-lightweight, but sounds good and resonates really well.”

His amp setup still relies on a preamp he built and keeps modifying. He uses Crown or Ashley power amps, and still depends on homemade speaker cabinets he has had since the ’70s, with Fane speakers.

“Again, we never thought that was gonna be a record,” he said. “We were recording every show, and when 9/11 happened, everything came to a standstill. I thought it would be a good time to look at what was on those hard drives. I picked the last show, September 8, from the top of the pile, and started mixing. And I started to realize it was a really good night.”

The guitarist might still be inviting comparisons to Hendrix, since the first CD opens with a cover of “Voodoo Chile,” and contains a modified version of “Red House,” but Marino stressed that both tunes differ significantly from the usual way in which they’re presented.

“‘Red House’ wasn’t even supposed to be ‘Red House’,” he said. “Anyone who plays knows that ‘Red House’ is not a 12-bar blues. So that’s actually my own blues thing. We were jamming, and when I came to the mic, I couldn’t think of any words. ‘Red House’ was just the first thing I thought of. It’s totally different; there are some jazz chords in there. I really wish I hadn’t sung those particular words that night, but since it was a live record, I didn’t want to do any overdubs. 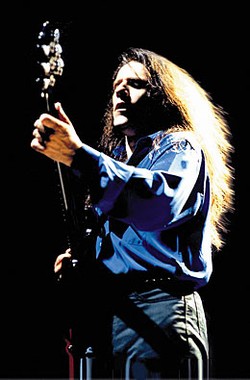 “When it came time to do the album, it would have been real stupid to pull ‘Voodoo Chile’ because of the Hendrix thing,” he emphasized. “I dare say I’m probably the only guy where some people would have a problem with that. When someone else does Hendrix tunes, nobody bats an eye. But when I do it, it becomes a little bit different. It’s gotten to the point that after 35 years, I really don’t give it a second thought. We’re there to play, and sometimes we do Beatle tunes, too. I don’t think an artist has to go onstage and sell his songs. You’re up there to create a mood, whether they’re your songs or someone else’s.”

As if to underscore his commitment to create a mood utilizing covers, if needed, the medley “Poppy” from RealLive is founded on an original instrumental, delves into the extended break from the Doors’ “Light My Fire,” and segues into the Cream’s cover of “Crossroads” and segments of the Zombies’ “She’s Not There” before returning home. Running time, over 26 minutes. There’s also a cover of “Somewhere Over the Rainbow.”

The tone on the instrumental intro to “Let There Be…,” which segues into “Strange Universe,” is decidedly different from Marino’s typical sound, and is played on the Glynn-made guitar.

“When you hold a note, it really resonates,” Marino enthused. “The other guitars don’t do that. It has a totally different tone, and was intended that way. It’s so cool to be playing loud and have that kind of body resonance going on. I wouldn’t mind playing something like one of those fat-bodied Gibsons, but they resonate too much, and you can’t control it.”

Marino also takes pride in the fact that he has eschewed his reliance on pedals, compared to his previous efforts (he had 22 in his rig at one point). There are a few moments where a listener will encounter a gizmo sound or two, but according to Marino, “Ninety percent of the album is straight guitar and amplifier.”

The band plans to tour in 2005, and RealLive is perhaps a preview – and proof that Marino is in fine form these days.


This article originally appeared in VG‘s April 2005 issue. All copyrights are by the author and Vintage Guitar magazine. Unauthorized replication or use is strictly prohibited.
Current Issue