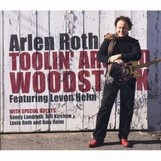 Roth’s “Hot Licks” instructional series has helped many a player. But he’s criminally overlooked to the general public. Toolin’ Around puts him in the limelight with wonderful songs that exhibit his mastery.

While most of the cuts feature vocals from Helm, Roth, Roth’s daughter, Lexie, or Levon’s daughter, Amy, a couple of instrumentals allow Arlen to cut loose. Dylan’s “Ballad of a Thin Man” gets the full treatment, with Arlen displaying his vast arsenal of chops. And just when you thought another version of “Sleepwalk” had reached the point of saturation, Roth’s slightly country feel gives it a breath of fresh air.

A bonus DVD lets you in on the making of the record, with behind the scenes rehearsal footage; watching the fellas listen to a playback of “Matchbox” proves they enjoyed it as much as you will.


This article originally appeared in VG‘s Apr. ’07 issue. All copyrights are by the author and Vintage Guitar magazine. Unauthorized replication or use is strictly prohibited.