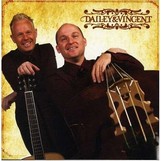 Dailey and Vincent’s powerful combination of effusive vocals and fiery instrumentals make this debut one of the most impressive bluegrass albums of ’07 – which was an exceptional year for the genre.

Jamie Dailey and Darrin Vincent are pros; Dailey spent nine years as lead singer and guitarist with Doyle Lawson, while Darrin Vincent has been with the Ricky Skaggs band as a multi-instrumentalist and harmony vocalist for 10 years. Together, they’ve garnered 21 International Bluegrass Musicians Association (IBMA) awards. Vincent co-produced three artistically and commercially successful albums by his sister, Rhonda Vincent. As bandleaders, they demonstrate their musical personalities.

Dailey and Vincent takes the best parts of Doyle Lawson’s Quicksilver band combined with the supersonic speed of Skaggs’ Kentucky Thunder. The opening tune, “Sweet Carrie,” clocks in at only 2:17, but is performed so briskly there’s time for a full-length banjo intro, three verses, four choruses, and three full-length solos!

But not all songs are Mach 10 barnburners. “River of Time” lopes along at slightly more than a toe-tapping 114 beats per minute compared to “Sweet Carrie’s” outrageous 193! Their vocal harmonies are as spot-on as their rhythmic vigor; Dailey and Vincent achieve a three-part blend that’s as smooth as any band in bluegrass, including Quicksilver.

Sidemen include Bryan Sutton (guitar) and Andy Leftwich (mandolin). Since both have regular commitments, it’ll be interesting to see who Dailey and Vincent recruit for a touring band. And if the resulting show is anything like the album, Daily and Vincent will be one must-see act.


This article originally appeared in VG‘s Mar. ’08 issue. All copyrights are by the author and Vintage Guitar magazine. Unauthorized replication or use is strictly prohibited.