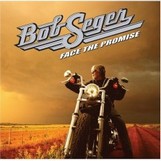 Anyone who saw Bob Seger & The Silver Bullet Band’s Letterman appearance several weeks ago can attest that he’s lost none of his power or edge during his decade-long hiatus. But, as his searing “Wreck This Heart” (not to mention Paul Shaffer & Co.’s solid string of Seger classics going into every commercial break) evinced, rock radio has been sorely lacking the kind of punch the Michigan rocker has delivered time and again.

Face The Promise illustrates that the 61-year-old has also lost none of his relevance, as not only a champion of straight-ahead rock but also a first-rate, thinking man’s songwriter and great interpreter of other’s material. “No More,” with a muscular string section bolstering the heavy acoustic strumming that has colored much of Seger’s catalog, is a pointed indictment of the status quo, with lines like, “Tomorrow is the price for yesterday/A billion waves won’t wash the truth away.” But immediately following that catharsis, Bob rips through Vince Gill’s country-rocker “Real Mean Bottle,” with Kidd Rock dueting on vocal, while guitarists J.T. Corenflos and Kenny Greenberg trade blazing solos.

Most of the album was recorded in Nashville, with its session aces proving they can handle more than just country, while Seger shows he can meet them more than halfway on “The Answer’s In The Question,” a duet with Patty Loveless. Two tracks were recorded at Bob’s home studio, with him playing all instruments (except Eric Darken’s drums on “Won’t Stop”), although they sound every bit as immediate (and CD-worthy) as the ensemble tracks cut at Ocean Way Studios. In both cases, Seger serves as his own producer, which makes him a threat on so many levels it’s pointless to keep count.

As intelligent, blue-collar singer/songwriters with roots-rock sensibilities go, John Fogerty and precious few others are in his league. And admit it: As tired as you’ve gotten hearing “Like A Rock,” it still makes you want to drive a big-ass truck up a mountain.

As he revealed talking to David Letterman, Seger’s 11-year absence was self-imposed. The biz didn’t leave him behind; he walked away from it to raise a family. Luckily, along with being a soccer dad, he also found time to write a bunch of great songs, and there’s apparently plenty more where this stellar batch came from. Hopefully, he’ll get around to releasing his next CD sooner than later, but in the meantime the Silver Bullet Band is hitting the road as we speak. Should be one hell of a tour.


This article originally appeared in VG‘s Jan. ’07 issue. All copyrights are by the author and Vintage Guitar magazine. Unauthorized replication or use is strictly prohibited.

Richie Hart – Blues In the Alley