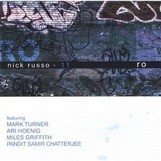 Nick Russo’s Ro is not an easy listen, but it sure is rewarding once you’re able to digest it. It’s somewhat indescribable; one could point out how it’s got hard-swinging post-bop, some free jazz, some middle-eastern music, and even a song with Russo on tenor banjo and chants, and it would all be correct. But it still wouldn’t really capture what this is.

On first listen, Russo’s traditional chops capture one’s attention. “Triggered” kicks things off, with a weird mix of quirky swing and break-neck-speed bop. “Mmm” is a nice walking blues with some of the best playing on the record. He solos wonderfully around the changes while remaining bluesy and soulful. And Russo’s tone is very near perfect – big and bold, but still subtle. Not thin, like some new players, but very full in the line of players like Jim Hall, Kenny Burrell, and Tal Farlow.

Ro offers an interesting mix of songs. It’s not for everybody. The nearly 11 minutes of “Please Come Home” may require some adjustment, with its buzzing, squeaking intro that leads into a free jazz sound where Russo and his horn section spread out. At first listen, it’s tough, but his playing lets you grab hold. The song, by the way, is for a buddy in Iraq, and its internal struggle matches what one might imagine is going on there.

It’ll be fun to see where Russo goes next. There are many interesting jazz guys out there these days, and he’s on the front line.


This article originally appeared in VG‘s Jan ’07 issue. All copyrights are by the author and Vintage Guitar magazine. Unauthorized replication or use is strictly prohibited.
The New Gear Yearbook