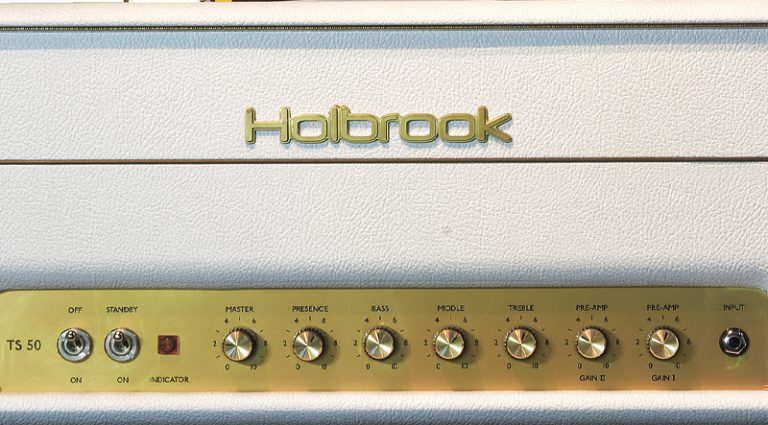 After Kevin Holbrook and rock guitarist Tommy Skeoch began working on a custom amp, the former took several trips to visit the latter, lugging prototypes between California and Florida. But, the mastermind behind Holbrook Guitars and Amplifiers was ultimately rewarded with something unique in a crowded sea of boutique amps.

The TS50 was tested with a Marshall 4×12 cab with Celestion Vintage 30 drivers, a Les Paul Standard with Burstbuckers, a Fender 1960 reissue Strat, and a reverb pedal patched into the effects loop.

With the Strat plugged in and the Gain controls on lower settings, the TS50 captured that classic, open Hendrix plexi tone – ringing chords and singing single notes. Turning up the Gain gradually pushed the overdrive into a lush supersaturation while it maintained good note-to-note clarity and separation.

With its British-sounding saturated overtones, punchy midrange, and ton of chime, the TS50 is classic plexi. With both guitars, its tone stack responded in a smooth, subtle manner, offering enough control without over-coloring. And the dual Gains offer thick, blistering overdrive to accompany near-infinite sustain when cranked – no need for an external OD pedal to push the front of this amp.

Speaking of, that front end proved very touch-sensitive, cleaning up nicely by altering pick attack or rolling back the guitar’s Volume. While the Master Volume did a good job ratcheting-down overall volume, with the master dimed, the amp absolutely sang with overtones. The effects loop performed well, too, adding no noise and robbing no signal or gain.

Lest you think the Holbrook TS50 is just another plexi clone, our takeaway was that it’s more like a plexi’s slightly evil twin with a “goes to 11” attitude and plenty of overdrive, while never losing that plexi chime and vibe. All those miles logged by Holbrook were well worth it.