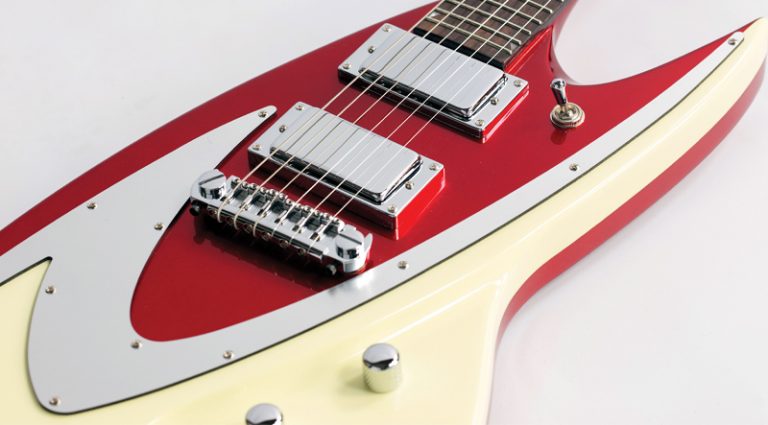 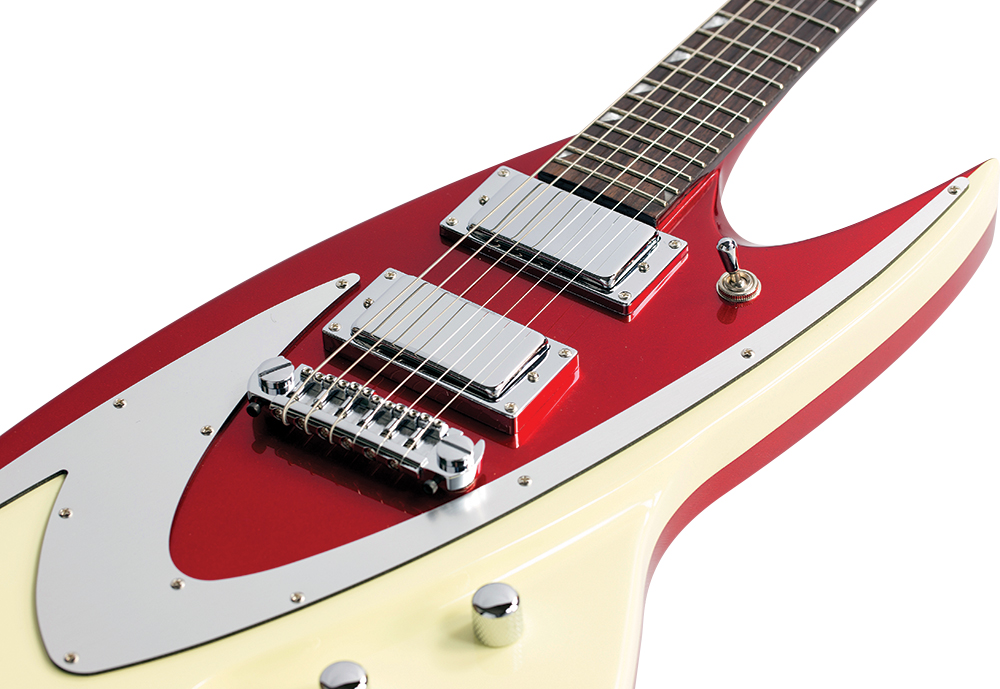 If George Jetson – or his daughter Judy, for that matter – played guitar, it’s safe to assume they’d go in for the Backlund 400, a futuristic-looking solidbody that’s part spaceship, part 1959 Cadillac.

This sci-fi axe, with its aerodynamic body and chrome adornments, is the brainchild of custom builder John Backlund, who has teamed up with Eastwood to roll out some of his designs at manageable prices. But don’t be fooled by its cool looks – the Backlund 400 incorporates classic solidbody design elements.

Scaled like a Les Paul at 24.75″, it has a mahogany neck and body, rosewood fingerboard, and dual humbuckers. The fretboard offers up 24 medium-jumbo frets and a 14″ radius with pearloid “ski slope” inlays. The glued-in neck’s “soft C” shape is pleasantly full, but not clubby.

For décor, the 400 sports a gorgeous, two-tone polyurethane finish of Cream with Metallic Blue or Metallic Red, or a Black/Mint combo. All showcase a dramatic brushed metal “Z” across the body.

Electronics include two custom-wound humbuckers with a three-way toggle and master Tone and Volume. There’s also a wraparound tailpiece and chrome tuners mounted on the six-on-a-side headstock. Given the design, you might be surprised by how well the 400 balances on the lap. And it weighs just 7.5 pounds – a welcome spec in an age of brick-like solidbodies.

Slung across the shoulder and cranked up, the Backlund 400 is as exciting as it looks. The flatter neck profile has the souped-up potential of a Flying V, particularly with all that access up the fretboard. The test guitar was set up with low action and nicely dressed frets, adding to its high-speed performance. The 400’s appearance may suggest surf or retro ’60s pop, but its mahogany body and humbuckers work for just about any style of music, including hot blues and hard rock.

There’s not much to argue about here. The Backlund 400 is a mid-priced import that looks great and plays well. Keep in mind that with the lighter body in combination with a broad expanse of fingerboard might result in some neck-dive, à la the Firebird, so be sure to opt for a real leather strap that will grip your shoulder. Its styling won’t fit everyone’s taste, but if you want to make a bold statement onstage, you won’t find many rivals to this swept-wing design. It’s retro and futuristic all at once, and has the tone and playability to get the job done.