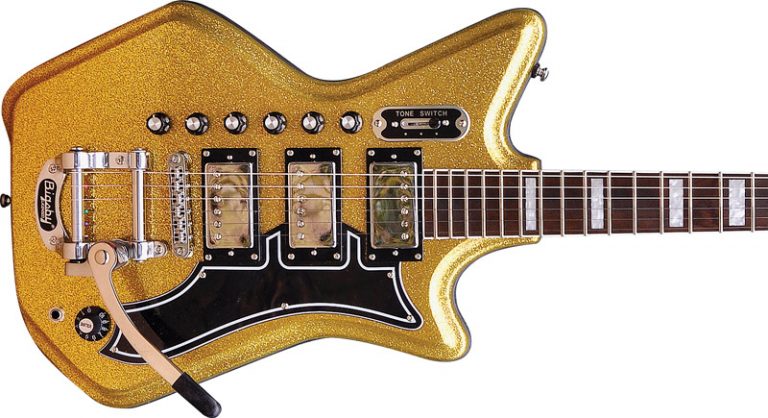 Long before the brazen, pointy electrics of the 1980s, Airline created a model with all kinds of modern angles and attitude. The original Airline electric guitars were made by Valco from 1958 to ’68 and sold through the now-defunct Montgomery Ward catalog and department stores. They were among the quintessential “cheapo” guitars of the era, and those made of composite Res-O-Glas have since become highly sought-after and seen in the hands of indie rockers like Jack White, PJ Harvey, and others.

Doing what they do best, the retro-minded Eastwood company has taken the design and resurrected it as a reliable and playable instrument – unlike some of the hard-to-tune vintage models out there with iffy truss rods and junky hardware.

The Airline ’59 3P – with three pickups and seven knobs – is offered in white, metallic blue, seafoam green, and a snazzy gold-flake finish. Unlike the Res-O-Glas originals, however, Eastwood makes the body from mahogany. It’s a hefty axe, weighing just north of eight pounds, but the tonal advantages of tonewood over fiberglass are obvious. An interesting tweak is the rubber binding, almost like a car bumper!

The Airline ’59 has a bound maple bolt-on neck with a rosewood fingerboard sporting 20 frets. Its scale length is a Fender-sized 25.5″ with a nut width of 1.688″ (111/16″). The fingerboard is inlaid with big-block pearloid markers with a sparkle to match the gold-flake finish, and its black, white-trimmed pickguard adds to the spectacle. The metallic-faced headstock is dressed with vintage Kluson-style nickel tuners, and a Bigsby vibrato sits on the other end.
Eastwood fits the Airline ’59 3P with three VVSC single-coils that are, interestingly, housed under humbucker-sized covers. Each has its own Volume and Tone control to make up that long bank of six knobs traversing the bass bout. Bringing order to this mass of knobs and pickups is a five-way selector (with sweet vintage-style switchplate), and a master Volume knob next to the input jack. It’s not a terribly convenient location, but it is historically accurate to original ’60s Airlines.

Fired through an Orange head and Fender cab, as well as a Musicvox tube combo, the Airline was a strong performer. The VVSC pickups are more tonally akin to Gibson P-90 models than Strat or Tele tones, which proves refreshing. The Eastwood sounds great clean or with moderate amounts of gain to bring out that garage-rock charm. It takes a minute or two to get used to having three sets of dedicated volumes and tones, but they can be preset for performances, which would save some time in the heat of battle. The neck has that wide, flatter D shape typical of many imports, but the setup on the tester was good – ready to help a player with their fastest licks. You can grab up to the 18th fret with ease, which may seem a shorter reach than most guitars but is well in line with authentic ’60s cheapos.

The Airline ’59 3P is a durable instrument with vintage Valco looks. If you play out live, audiences will dig its shape and gold-flakes glimmer, while the pickups will cover anything from the Tielman Brothers (look ’em up!) to the B-52s and Black Keys. If you don’t need that middle pickup, Eastwood also makes one- and two-pickup models, as well as reissues of other Airline designs. – Pete Prown