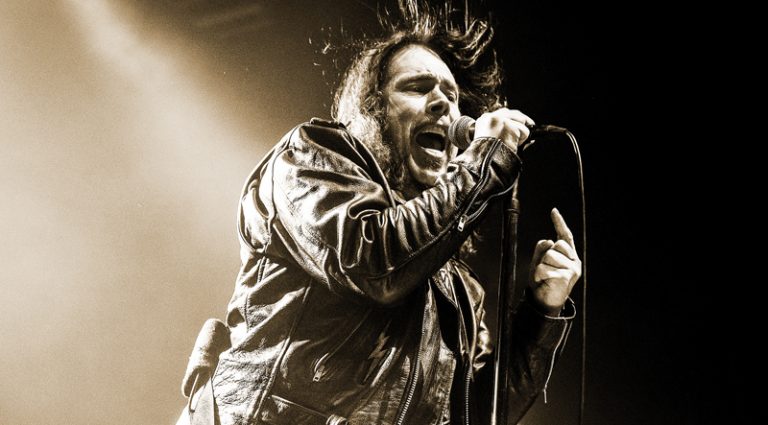 In the early ’90s, a handful of bands were trailblazers in the realm of “stoner rock”; Kyuss, Sleep, Fu Manchu, Clutch, and especially Monster Magnet. Led by singer/guitarist Dave Wyndorf, its two 1991 albums, Tab and Spine of God, are now considered classics of the genre. Both were recently reissued by Napalm Records, so we asked Wyndorf to take a look back.

While writing the songs on Tab and Spine of God, did you have any idea that they’d be special?

Not to anybody else, but they were special to me. I was completely freaking out on loving the fact that I was recording something. I learned to play guitar about two years before, and started writing songs by myself on a four-track. But there I was, in a studio. It was local, but it was a big deal to me. I had no clue that anybody else would like it.

Given the term “stoner rock” is so often applied, some may wonder what role drugs actually played in the creative process.

Just in memory, really – especially Spine, which is really a story of my teenhood experience. I thought it was funny to celebrate a big part of my ’70s childhood and how I loved the drug culture more than the actual drugs. I loved the music. My first band was punk, so I didn’t get a chance to express any of that. When I started playing and writing, it started coming out – the teenhood stuff, all the drugs did. Acid and pot, in particular. There was a certain “dumb glory” to it, and that’s what I wrote about. So, drugs played a big part, but I wasn’t on drugs when I wrote it.

In the reissue process of the albums, did you gain a new appreciation for the tracks?

They all mean something to me. I like the little ones a lot, like “Zodiac Lung” and “Lord 13,” just ’cuz they’re, for lack of a better word, subtle. And I also like them because they were recorded basically on my four-track at home, then I just transferred them to the 16-track. So, it’s like the ultimate cost-saving device – a Tascam four-track that’s on an album!

How was it working with guitarist John McBain on those albums?

John was great. Him and Tim Cronin were big parts of early Magnet. They had a band called Dog of Mystery, and I had joined that band; it was kind of an experimental/noise band. Just all kinds of weird stuff, no particular song structure. Then we changed our name to Monster Magnet, so they were in on it in a big way. McBain was one of the most talented guitar players I know, mainly because of what he doesn’t play. He doesn’t over-play.

Which guitars, amps, and effects did you use back then?

It was all pretty low-tech. I remember John was playing a Squier Strat, and I think it was an old blackface Fender amp. I can’t remember exactly what it was. It wasn’t a Twin… I think it was a Super Reverb. And I was playing a Washburn guitar through an Ampeg solidstate amp with the midrange cut out of it completely because I thought it would sound like Sabbath. It sounded like hell, but it sounded good – had a cool thing to it. And we used old Echoplexes, original ’60s/’70s Big Muffs, Cry Baby wahs. It was definitely on the cheap.

And what do you use today?

Lately, I’ve been playing SGs. On the new record, I have a lot better choice of guitars – early/mid-’60s SGs, Gretches, and Danelectros for certain things. Not a lot of Fenders these days except for maybe single-coil lead stuff through fuzz boxes. The single-coil seems to work better through fuzz – keeps more of the original “fuzz sound.” And lately, trying to go for more natural amp distortion on the rhythms, and save the fuzz for the leads.

What’s the story with the new Monster Magnet album?

It will be out in the top of the year. It’s just a straight-ahead rock album, more along the lines of old Detroit style. It’s almost punk in a way – fast, Stooges-style uptempo thing. It’s a little less psych than the last couple and more in-your-face. I dig it. We had a really good time making it. It’s guitar heaven, I’ll tell you that. We used every kind of guitar. If you like guitars, you’ll like this album. The album is called Mind F***er.