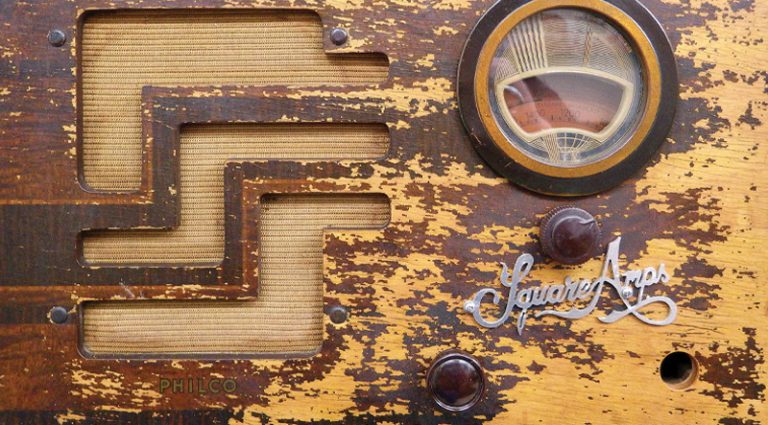 Matt Richards builds basic cathode-bias amps housed in the carcasses of vintage radios. They’re designed to be compatible with various tubes, giving the user a range of output and tone choices.

His Chippy amp has a single Volume knob on the front and a negative-feedback loop pot on the back that acts as a combination Gain/Tone control that alters (subtley) the amp’s response and brightness. We experimented with everything from KT88 to EL34 tubes, and each imparted its own character; KT88s were warm and silky, 6L6s were tight and compressed, while EL34s made the Chippy roar and croon with toppy bite.

No matter the tubes, the Chippy’s 8″ speaker sounded thick and warm, its simple circuit nicely responsive – low-end was a little loose (lending an excellent vintage-Fender sag) while mids were brash and raunchy with balanced dynamics that didn’t overemphasize high or low mids. With cleaner settings, highs sounded rolled-off – again keeping the Chippy’s vintage-tone footing. When the Volume knob was turned up, however, high-end bite jumped more the harder we dug in.

Pushing the volume with a 2×12 extension cab allowed this “little radio that could” to keep up with loud drumming. Tubes (specifically power tubes) really make a difference in sound and response.

The Chippy offers looks and feel that reinforce its stellar sounds. Far from gimmicky, it packs versatility and punch. A quick swap of tubes can send it in many sonic directions including classic favorites and – more importantly – to something unique to each player. Plugged into a 2×12 or 4×12, it’ll keep up with a band while offering dreamy dynamics and incredible tone.

The Chippy is beautiful, but it’s far from being all style and no substance.