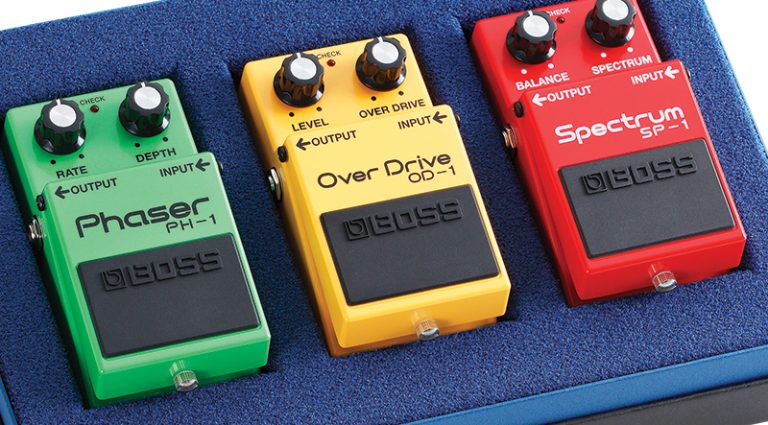 For players of a certain vintage, there’s something gratifying about an old-school compact Boss pedal at your feet. Even with the evolution of more-sophisticated pedals, those bright, uniform boxes reliably recall a formative time.

Boss is celebrating its compact pedal line with Box 40, a special-edition set containing reissues of the three that introduced the compact series in 1977 – the OD-1 Over Drive, PH-1 Phaser, and SP-1 Spectrum. Affectionately known as the “traffic light” set, this throwback three-fer is a chance to reclaim a piece of the past.

Like the originals, the reissues were manufactured in Japan, and Boss took pains to faithfully reproduce the early circuits in all their buffered-bypass glory. Design specs were followed closely and components tweaked by hand to match original response characteristics. Whether a player is nostalgic for a first-generation model or they rocked a later Boss with more bells and whistles, they’ll appreciate the classic tones and blissfully simple functionality – two knobs and the truth.

The OD-1 was a groundbreaker in ’77 and the first in the Boss compact line. At a time when the smooth-edged sound of an overdriven amp wasn’t yet available in a stompbox, the company secured a patent on asymmetrical clipping-emulating tube distortion. Producing a soft, compressed overdrive, the OD-1 fattens a lead line and enables a chewy distortion for rhythms. A nice range of warm saturation is available within the sweep of the Over Drive control. The drive is tight in the bottom, big in the middle, and versatile, while not especially transparent. Though there is no Tone control, you won’t miss it; instead, pick attack, guitar volume, and pickup selection can be used to draw out a biting crunch, subtle buzz, or soaring lead tone.

The PH-1 is dark and swarshy, with that rich sound characteristic of vintage phasers. Distinct effects are available by working its Rate and Depth knobs. The phasing gets thick as you twist Depth past 12 o’clock and transition to a subtler background wash by dialing Rate back toward 9 o’clock. The Rate slows all the way down to 16-second cycles and up to 100 ms, which yields a Leslie effect. There’s a Uni-Vibe sound hiding in here, too, not to mention a built-in dry/wet mix, with the dry signal out front and never at risk of being drowned.

Finally, the SP-1 Spectrum, with its circuit borrowed from early Roland amplifiers, is like a single-band parametric EQ. Frequency between 500 Hz and 5 kHz can be selected with the Spectrum knob and then emphasized or deemphasized using the Balance control. The SP-1 is a bit of an odd duck but Boss has always been good with usable guitar EQ. A fixed-wah effect is easily dialed in. Tee up a tone to cut through the band, such as a high-mid boost for a honky, twangy solo. It’s also great in conjunction with the OD-1 to hone in on feedback frequencies.

Boss indulged just a few modernizations for the reissues, including a PSA-compatible power supply with a protection circuit and noise filter; reinforced battery snaps; and an on/off LED indicator. It says these are one-time-only reissues and that a total of 1,500 boxed sets will be produced. Upping the ante for collectors, the pedals in each have matching serial numbers and the presentation includes a note from Boss’ president imprinted with the same number.